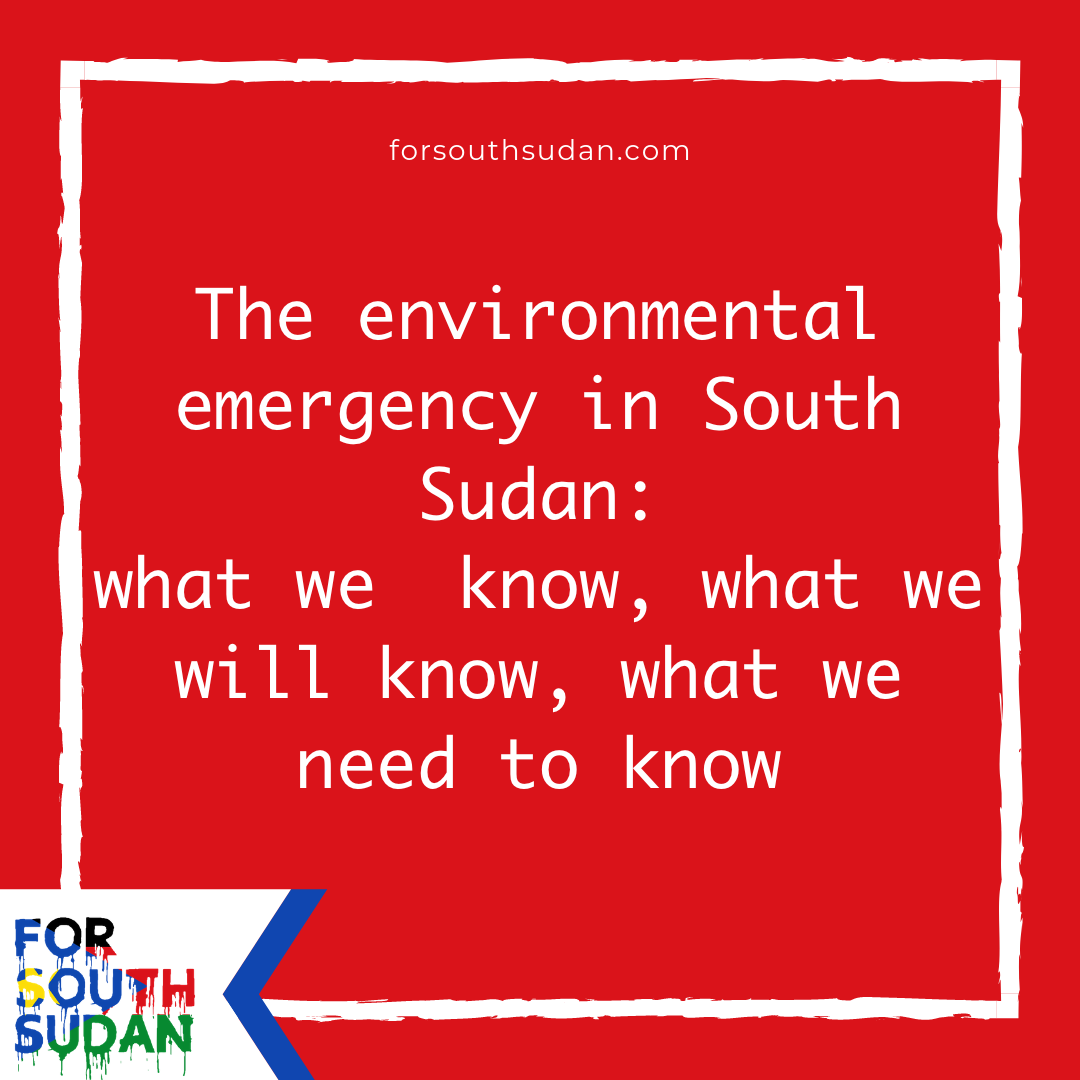 The environmental emergency in South Sudan: what we now know

That South Sudan‘s environment has some of the world‘s highest levels of lead poisoning.

And that this has been and is being caused by oil extraction.

That lead is joined by a “witches’ brew” of ultra-toxic chemicals and other noxious materials in poisoning much of the ground water and farmland in South Sudan.

And that at least 600,000 people have lost their health, homes and livelihoods because of this.

And that South Sudan’s levels of pollution give rise to one of the most deadliest environments in the world.

That this destruction of health – with this especially applying to that of infants – is the subject of official acknowledgement, of medical investigations and of international concern and outrage.

That the poisons lodged in the country’s aquifers and on much of its land are virtually impossible to dislodge or remediate. This poisoning will thus continue to devastate life and livelihood for centuries to come.

That these poisons have also made their way into the Sudd, one of the world’s largest and most precious wetlands, and into the Nile, which is the source of water for 80 million people.

That South Sudan’s oil fields and environs are dotted with ponds containing ill-secured oil wastes that are fire and environmental hazards. How combustible they are is shown by the recent rash of fires. These ponds are thus time-bombs waiting to explode.

That most of South Sudan’s pipelines and oil processing facilities are badly-maintained and out-of-date. This state explains the large number of oil spills and leaks experienced over the last year. Many more are set to occur.

That all these problems stem from the greed and inhumanity of such oil companies as Sweden’s Lundin Petroleum, Malaysia’s Petronas, China National Petroleum and India’s ONGC Videsh.

That this greed and inhumanity have led oil companies to willfully disregard international, national and corporate standards of environmental protection and technical operation.

That this disregard has led to Lundin’s chief executives’ being investigated by Sweden’s National Office of Prosecution for “crimes against humanity and the environment”. A trial may follow.

That this disregard has led to Petronas, China National Petroleum and ONGC Videsh’s being accused of being complicit in crimes against humanity and the environment, with these including mass killings, rape and expulsion.

That this disregard was facilitated and abetted by South Sudan’s government, which has embezzled nearly all of oil revenues for political leaders’ personal gain and for the financing of warfare and oppression.

That this oppression comprised of a full-scale terrorizing of journalists and activists.

That the government of South Sudan has admitted to the country’s experiencing an “environmental emergency”, and that it has committed itself to putting an end to it. And asked for the world’s help in doing such.

That the government of South Sudan has committed itself to launching a country-wide environmental and societal assessment, one that it is set to reveal the full extent of the ravaging of the country by oil pollution.

Environmental emergency in South Sudan: what we will know

The true extent of the poisoning of South Sudan’s water, land and air.

Any new incidents of oil spills, leaks and fires – immediately!

Thanks to the alerting and verification provided by

advances in satellites-based coverage of this environment, and to the increasing sophistication in the processing of the images generated by satellites;

the coupling of satellites-based images with those generated by smartphone-wielding residents and activists on-site in oil fields;

and thus the shredding of the blanket of oppression cast by the South Sudanese government and by the oil companies over the truth about oil pollution in the country.

Satellites and smartphones are already heartening and mobilizing members of local communities to stand up for their rights and to report oil pollution.

Environmental emergency in South Sudan: what we need to know – and from whom

From the oil companies: primarily Petronas of Malaysia, China National Petroleum and ONGC Videsh of India – and the consortia of which they form part:

The natures, locations and amounts of poisons spewed by their operations into South Sudan’s water, on to its land and into its air

The number, contents and locations of their oil ponds and other storage sites, and the nature of their security and environmental protection measures – if any or at all.

The existence and extent of internal and other reports on their misdeeds – environmental, societal and political – compiled by them and their agents.

The existence and extent of internal and other reports compiled by them on breakdowns of and deficiencies in their oil processing facilities, pipelines and equipment.

The amounts of funds disbursed by them to finance repression, corruption, intimidation and cover-ups; and the incidence of such financings.

From the government of South Sudan

The disclosure of all reports compiled and information possessed by it on incidents of oil pollution, on the damaging of human and environmental health, on illegal and deficient practices undertaken by oil companies and their agents, and on acts of corruption and intimidation committed by it and its agents.

Aid workers report on being assaulted and raped