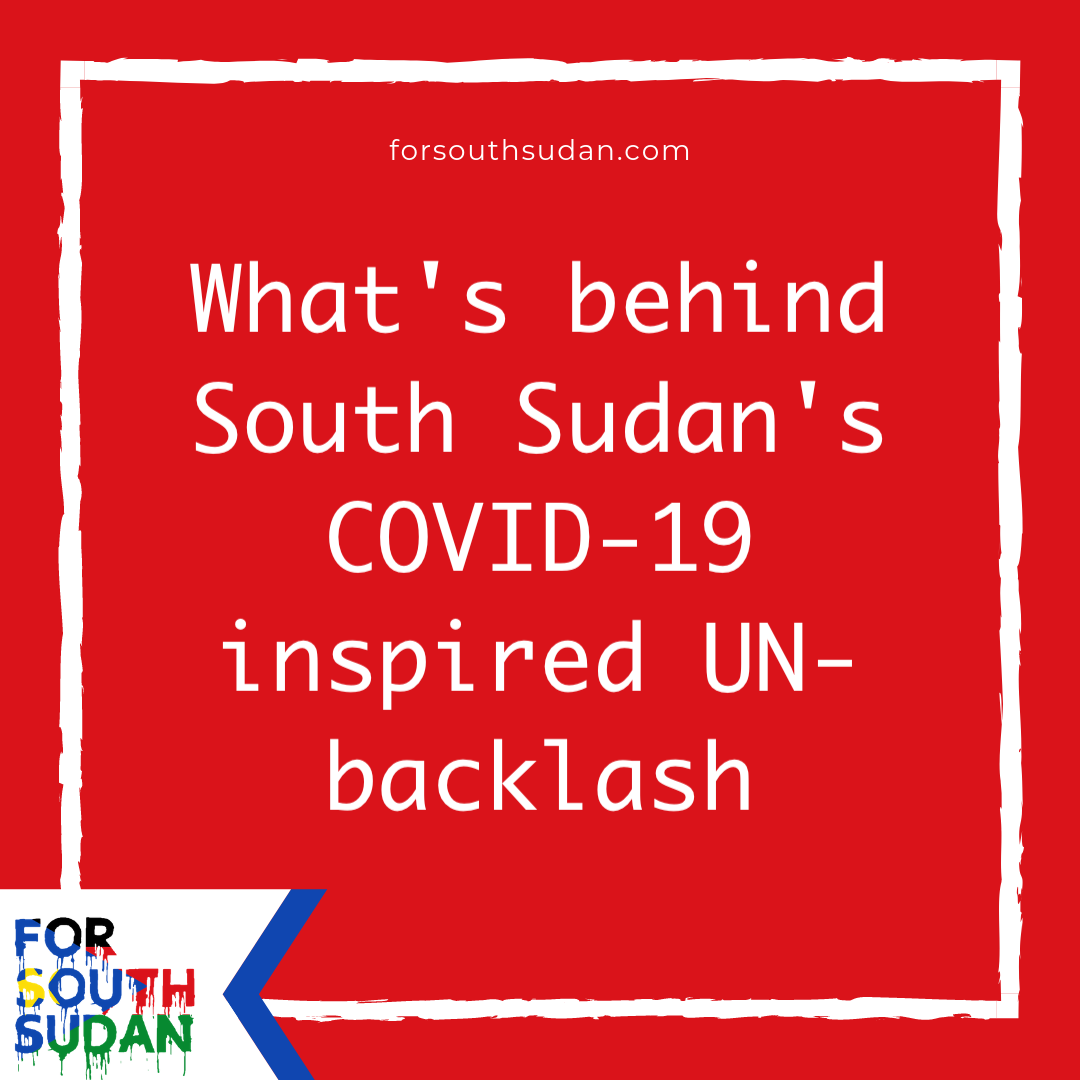 ‘If coronavirus hits South Sudan with its non-existent healthcare system, it will be disastrous.’

With additional reporting in Juba by Okech Francis

South Sudan reported its first four cases of coronavirus this week – all UN staff members – and the news quickly triggered a xenophobic backlash that has amped up tensions and restricted the movement of aid agencies.

The first case was reported on Sunday. The patient had been in the country for five weeks before the onset of symptoms, which would have been an unusually long incubation period if they had been infected outside South Sudan.

Government soldiers surrounded bases of the UN peacekeeping mission in Juba and Malakal, and some humanitarian hubs. The soldiers reportedly told displaced people in Malakal that they could not leave as they had been infected by coronavirus.

In response, the UN suspended all but essential movement of staff, and some other aid agencies followed suit.

On Tuesday, a second UN staffer tested positive. They had flown in from neighbouring Kenya on 23 March, and special dispensation has been given for them to be flown back this weekend. Contact tracing of the first patient led to the third positive case announced on Thursday, and then a fouth on Friday, a Sudanese national, the driver of the UN staff member. His infection is the first case of local transmission.

The COVID-19 threat comes on the heels of the inauguration of a new power-sharing government. This briefing looks at the challenges facing the new administration – buffeted by political uncertainty, a humanitarian crisis, and a steep drop in oil revenues.

How vulnerable is South Sudan to COVID-19?

South Sudan has one of the weakest healthcare systems in the world – sapped by six years of war and chronic underfunding. The conflict, which officially came to an end only on 28 February, has left six million people – half the population – short of food and with compromised immune systems. Some 1.7 million people are displaced with 180,000 sheltering in six overcrowded UN-protected sites.

There is a critical shortage of qualified doctors and nursing staff – and just four ventilators in the country. More than 40 percent of the population have no access to even primary health care services, and international aid organisations run nearly all of what is available. The main source of water for most people is ponds and rivers.South Sudan has one of the weakest healthcare systems in the world – sapped by six years of war and chronic underfunding.

The government has launched an awareness campaign, involving now standard messaging on hygiene, social distancing, and restrictions on gatherings. It has also closed its borders. “But if coronavirus hits South Sudan with its non-existent healthcare system, it will be disastrous,” said a UN official who asked not to be named so they could speak freely.

President Salva Kiir has tended to view the UN mission with suspicion. It is both a sovereignty issue – rancour over the peace enforcement mandate of the UN peacekeeping mission, known as UNMISS – and concern that the UN was part of a regime change agenda.

The rash of anti-UN Facebook posts this week seemed to tap into that same resentment.

“I urge South Sudan youths to attack UN staffs across the country to revenge themselves before they die,” said one.

“I have prepare my knife to attack any UNMISS tomorrow even this evening,” said another.

“It’s unclear how much of that is sponsored or mobilised by the government,” Alan Boswell of the International Crisis Group told The New Humanitarian. “We have seen the government urging people not to conduct hate speech against foreigners.”

Kiir responded directly to the controversy on Thursday.

“I must warn you that COVID-19 can be brought into the country by anybody, including South Sudanese,” he told a press briefing. He called for an end to “xenophobic utterances against our guests and those who have come to provide services to us from different countries and organisations.”

Although the introduction of cholera to Haiti in 2010 is an example of how a large, multinational UN mission can inadvertently be a health risk, “we are taking all measures we can to contain the virus,” said the UN official.

“We have privileged access to a health team at the UN clinics, so our chances of being diagnosed are higher.”

How solid is the peace process?

A long-delayed unity government was formed at the end of February, ending a conflict that has killed an estimated 400,000 people. Rebel leader Riek Machar was appointed first vice president as part of the power-sharing deal and returned to Juba – a city he twice fled when previous national governments fell apart in 2016 and 2013.

Amid fears that he would be politically isolated, Machar is now heading the government’s COVID-19 response, “and that bizarrely has legitimised his position in government, as it has given him quite a lot of authority,” said Boswell.

A key outstanding issue in the peace process is the appointment of governors and administrators to the country’s 10 states and three administrative areas.

The dispute is not just about resources and patronage. Deep local-level communal competition is at the heart of the national coalitions represented by Kiir and Machar.

The lack of agreement has created a dangerous political vacuum. In Jonglei State, ethnic clashes flared last month between the Murle, Lou Nuer, and Dinka, displacing thousands. In Bahr el Ghazal and Lakes, recent cattle raids and revenge attacks have also led to loss of life.

In the past, governors were able to convene meetings between rival groups to iron out differences. “Now, at a time when we need a functional government, we don’t have decision makers at local level,” an international aid worker told TNH.

A ceasefire was in place nearly two years before the coalition government was inaugurated. “It seems that Kiir and Machar agreed it was in their best interests to stop fighting,” said Boswell. “They just hadn’t agreed to the final on the final sticky details of how to share power.”

Can the government survive the economic cost of COVID-19?

The government relies on oil revenue for 98 percent of its annual operating budget. It based its 2019/20 budget on an oil price of $55 per barrel – but the international spot price has crashed to around $25. South Sudan also pays heavy transit fees to Sudan for access to the country’s port.

“A collapse in oil revenues could not have come at a worse time.”

“A collapse in oil revenues could not have come at a worse time,” said Boswell. “In the past [Kiir] has tried to essentially buy off aggrieved warlords; this will limit the ability to appease those groups.”

With business already drying up in Juba and prices rising as a result of the government’s coronavirus measures, the UN official said they were worried the impact a long-term shutdown could have on already fragile livelihoods – and security.

The hope is that any coronavirus outbreak can be quickly contained.

Otherwise, “you could imagine a very militarised response, and that could quickly become a humanitarian and political crisis all in one,” said Boswell.