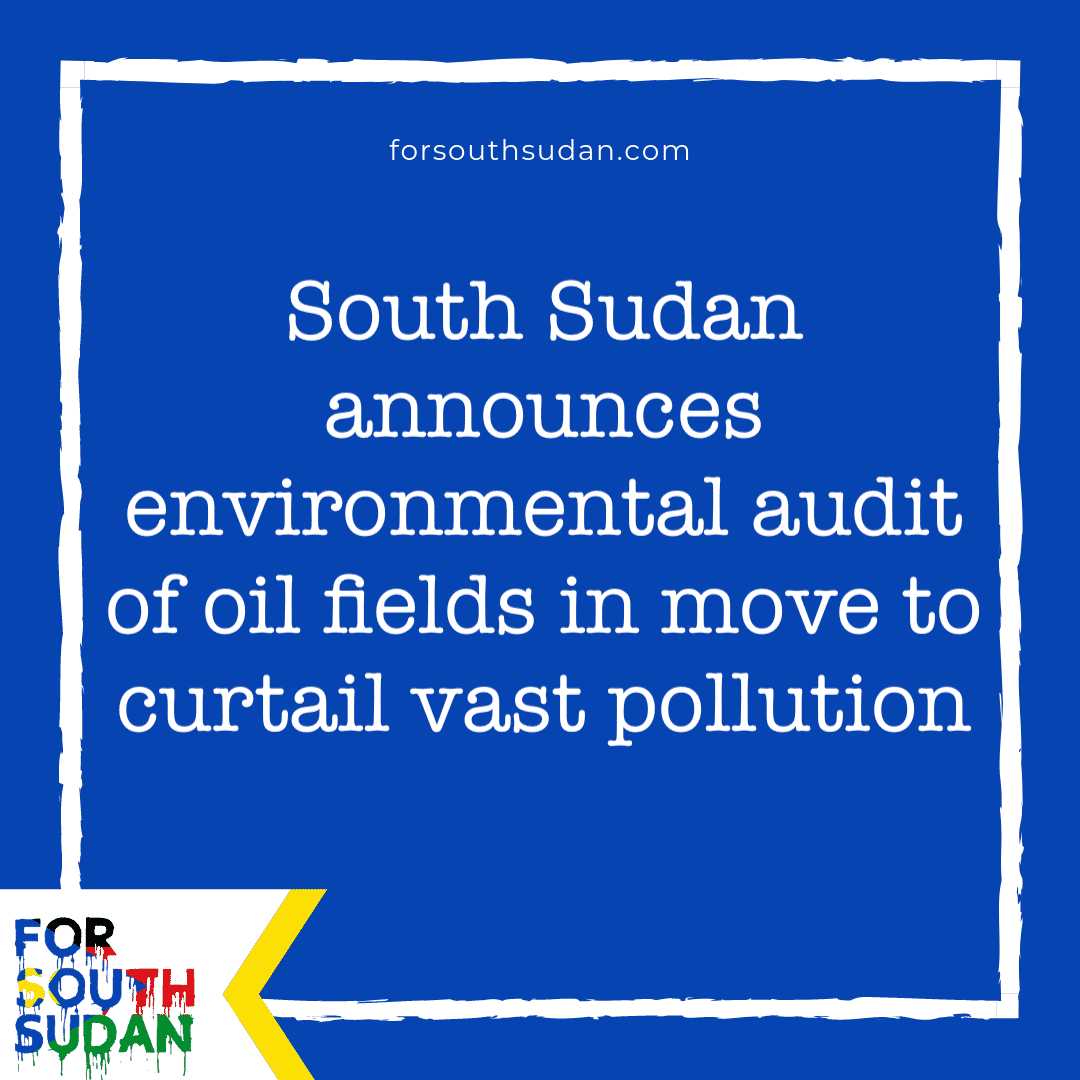 The government of South Sudan announced on January 14, 2021 that it is going forward with the conducting of the comprehensive environmental audit of its oil-producing regions. Originally scheduled for a year ago, the audit is being conducted in order to reduce the pollution ensuing from years of negligence and lack of concern.

In announcing the audit, Puot Kang Chol, South Sudan’s minister of the environment, stated that the objective of the audit is to determine the extent and impact of oil pollution upon his country’s people and the land.

The first step in the conducting of the audit will be the convening of a committee to assess the 11 bids received. The committee is to be comprised of representatives of the relevant ministries and government agencies, and, as well, of South Sudan’s civil society.

The audit forms part of the government’s efforts to abate the pollution plaguing the communities located in and around the oil fields.

The audit is to be followed by the implementation of systems designed to forestall further environmental and societal damage. The audit’s conducting comes at a time in which the government is seeking to ramp up oil production.

Originally scheduled for early 2020, the planning of audit was preceded by the warning issued in August 2019 by Salva Kiir, South Sudan’s president. In stating that his government would be taking a stronger stance against pollution in oil-producing areas, Kiir said: “I will not tolerate irresponsible activities in the oil sector.”

The “irresponsible activities” refer to the consortia producing oil’s failure to adhere to the strict standards of health and operation codified in South Sudan’s Petroleum Act of 2012. Exacerbated by a lack of governmental enforcement, this failure has led to the widespread contamination of water, farmland and climate in and around the country’s oilfields.

The result has been devastating losses of farm and grazing land, of livestock, and of forests and other habitats.

Even more grave has been the impact upon the health of South Sudan’s people, with this especially applying to its most vulnerable persons – women and children. Miscarriages and births of deformed infants are allegedly widely prevalent in the oil-producing regions.

At the press conference held to announce the staging of the environmental audit, minister Kang said: “We are here to ensure adherence to our laws – and not to please individual players. I call upon the committee to make sure that their deliberations are within the bounds imposed by law. They are not to act upon the behest of a minister or other persons.”

Kang further: “The whole world – and each of South Sudan’s citizens – is watching us. They have condemned us for not having handled our environmental problems.”

The minister added: “It is time to save the life of our people and our environment. It is time to put the lives of our people first. Oil will be some day depleted, but our land, never. Our land is the prime resource of our people – not oil. We need to protect the lives of our people. We have to make our reserves of oil a blessing and not a problem for them. This especially applies to the people living in communities in the oil-producing regions. So let us place us the highest priority on serving and saving the people and their lands in these area – and not on oil.”

Oil is virtually the sole source of revenue for the government of South Sudan, the world’s youngest nation. Years of civil war (killing 400,000 and forcing 4 million to flee), plunging prices on world markets and a lack of investment have reduced production of oil in the country to some 170,000 barrels a day.

Commenting on the commencement of the audit, Mary Ayen Majok, Acting Speaker of South Sudan’s Council of States, stated that oil pollution has caused ‘untold damage’ to residents of the oil-producing regions. As Mary Ayen Majok pointed out, the suffering of these victims cries out for the making of immediate and bold corrective measures.

“What is taking place is not a joke,” said Ayen. “We have seen with our own eyes the effects of oil pollution. I am talking about deformed kids. This is not the nation we want. What we want, what we should strive for is that each citizen of South Sudan leads a life of dignity and health, a life of freedom and of exercising of her or his rights.”

Ayen added that this protection of human and environmental rights is the best course of action for South Sudan, as the environment and people constitute the most valuable resources possessed by it.

Ayen went on to urge South Sudan’s oil companies to work closely with the government, so as to bring best practices to their industry and to the country’s communities.

In 2020, South Sudan’s renowned Sudd Institute reported the incidence in the northern counties of Melut, Ruweng and Rubkona of 13 cases of babies born with deformities linked to oil pollution.

The awarding of the tender to conduct the audit is expected for the end of March. The audit itself will take six months.

The audit is expected to reveal and detail the vast extent of the damages wreaked by more than two decades of oil production and transportation.

As minister Kang notes: “We are not making any assumptions about what the audit will find. Whatever these findings are, we have to be ready to accept them, and implement the measures required. These will preclude or at least mitigate any further pollution of the environment.”

Video allegedly shows oil spilling into ditch and on to land in South Sudan! Recorded by engineer in charge of cover-up for oil consortium.