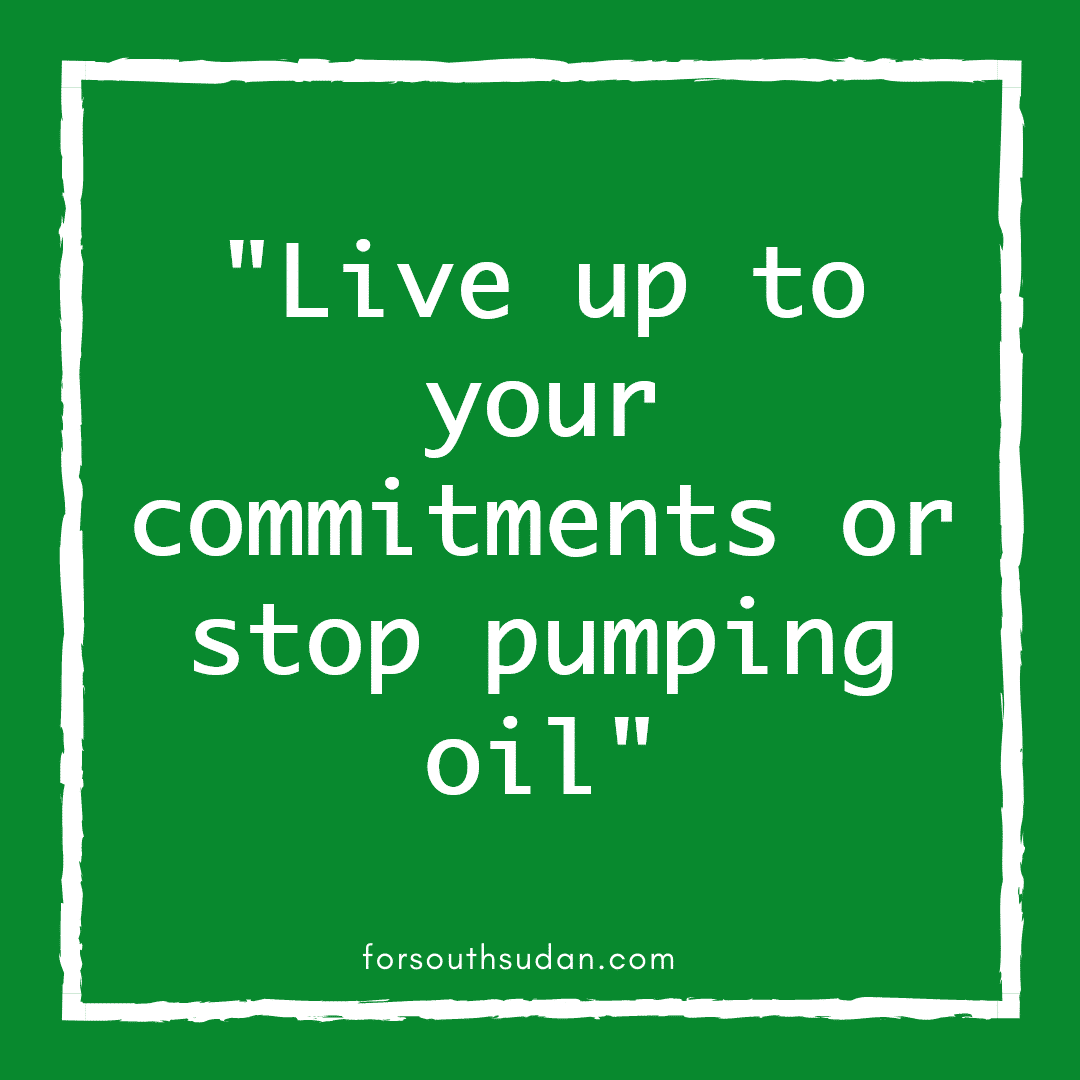 Victims of oil pollution in South Sudan: ultimatum to companies and government

by By Hou Akot Hou

The unprecedented uprising of victims of oil pollution in South Sudan scored what seemed to be a significant victory in late August: the country’s government acceded to all of the victims’ demands via the signing of a memorandum of understanding. The MOU’s stipulations are listed below:

Three weeks later, this ‘victory’ is looking more and more like the latest in a long series of sweeping promises made by the government of South Sudan – and never kept.

To force the government to live up to these commitments, representatives from communities located in the Unity oil fields convened mid-September in the town of Bentiu.

These representatives were from women’s, young people’s and other groups; from the regions of Rubkona, Guit, Tharjaath and elsewhere, and from the various clans living in the state.

The meeting ended with the representatives’ issuing of a stern ultimatum to the government and to the oil companies operating in the state: keep your promises – or face the consequences. These will presumably be a resumption of the peaceful, mass demonstrations in the state of Unity.

The representatives didn’t stop there. They broadened their demands to include the provision of compensation to all those who lost their homes due to oil drilling and to the bloody civil war and strife ensuing in 2013-2016 from the struggle to gain control over the oilfields and their revenues.

Many of the residents who fled this turmoil have recently returned to their homes – only to find that they have transformed into sites for the drilling and transporting of oil.

The pipelines doing such are worn out and badly-maintained. A never-ending series of oil spills is the result. Putting an immediate end to these is another of the representatives’ demands.

In response, the government and the DPOC oil consortium operating in the Unity oil fields shifted the blame from themselves to the largest shareholders in the consortium, which is China National Petroleum Corporation.

As local residents pointed out, it is the government’s job to enforce the laws passed to prevent the environment and people-unfriendly actions undertaken by DPOC.

“We well know what our country’s laws are in this area, and we are tired of trying to make the government and the oil companies observe them,” said a person living near the Rubkona oil fields.

A local clan chief stated: “We were always against the exploration and pumping of oil in our regions. And ever since it started, we have struggled to force the Juba government to live up to its contractual commitments.

Key among these promises: the people in South Sudan’s oil producing regions have a right to 2% of the revenues yielded by this production. As a locally-based woman pointed out: “Show me where this is happening! No signs of it at all.”

The above-mentioned memorandum of understanding was signed on behalf of the government by the country’s ministry of petroleum, which is also responsible for the MOU’s implementation – along with the state’s government.

Hou Akot How, the South Sudanese writing for forsouthsudan.com, repeatedly tried to get a statement from the ministry on this implementation. It refused to respond.

As the representatives of the oil producing regions and groups pointed out, the government has no choice but to live up to its commitments. This is because of the oil pollution’s getting more pervasive and severe in the oil producing regions. This step-by-step destruction of their homes leaves local residents with a simple choice: either to fight for their rights – or pack their bags and head off to a refugee camping offering shelter and subsistence.

The MOU accedes to the key demands placed by the victims, who had been demonstrating for them for a week in huge numbers in and around the local oil fields, which are operated by Dar Operating Petroleum Company (DPOC).

Commitments made by the government include:

The provision of clean water – via the step-by-step extension by DPOC of the network of pipes.

The expediting by MoP of the audit and assessment of the environment that had been promised for the beginning of the year – and the sharing of the reports issued each month on the ailments treated at the local hospital – including lead and other forms of oil-caused poisoning.

The replacement of allegedly corrupt and inefficient providers of health services with local, trustworthy ones.

Why independent journalism is crucial in South Sudan