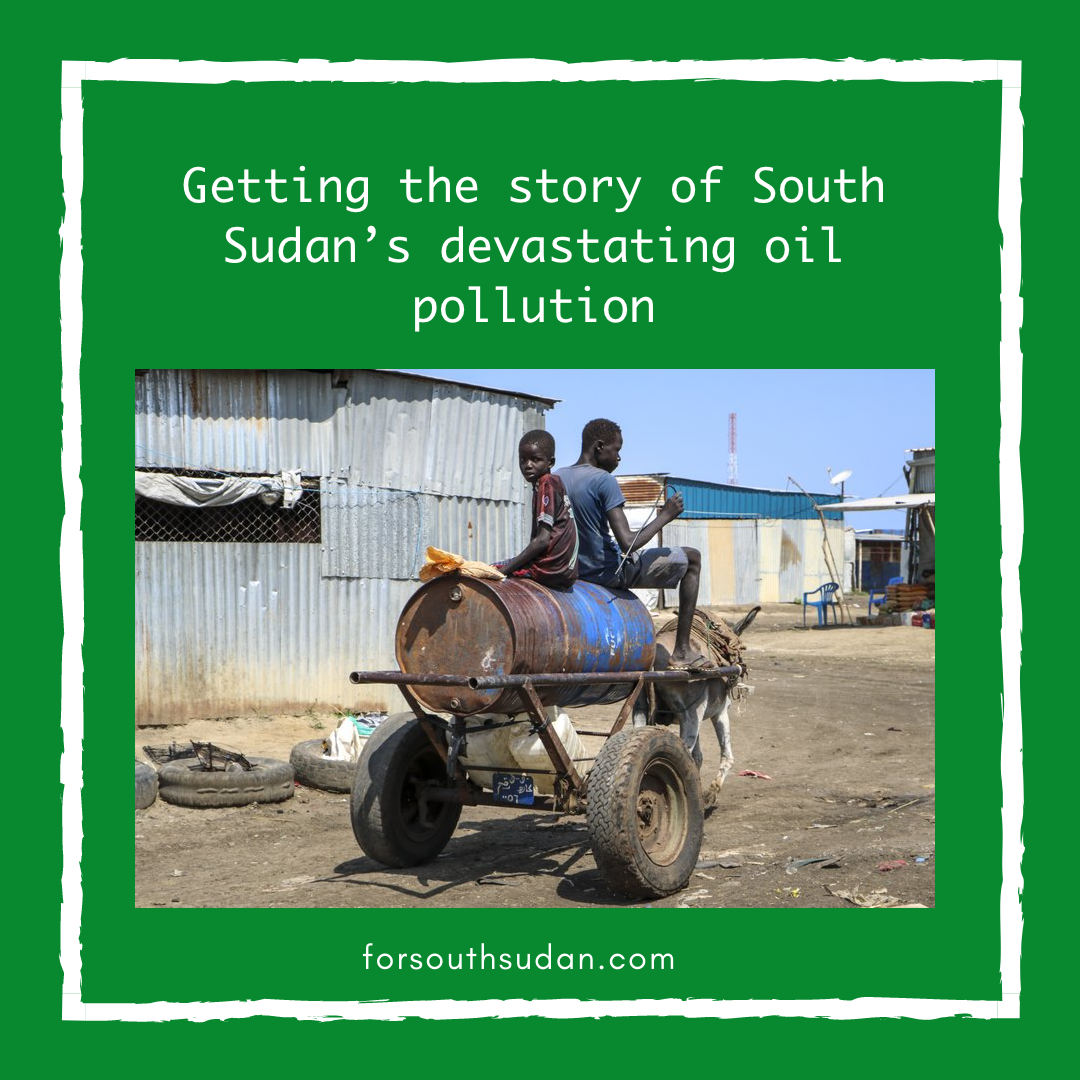 In this photo taken Monday, Oct. 1, 2018, residents stand by the side of the road after fetching water, between Melut and Paloch town, in South Sudan. The oil industry in South Sudan has left a landscape pocked with hundreds of open waste pits with the water and soil contaminated with toxic chemicals and heavy metals, and accounts of “alarming” birth defects, miscarriages and other health problems, according to four environmental reports obtained by The Associated Press. (AP Photo/Sam Mednick)

These are the suspected effects of the pollution from South Sudan’s oil industry that I was determined to document.

The people I spoke to in the oil-pumping area in the country’s northeast were desperate to describe how their lives have been harmed by the pollution and how they could not get help. One woman shouted at me from across the yard as I emerged from her neighbor’s house. Had I come there “to save them?” she asked.

I had been reporting in South Sudan for nearly two years and learned that the rampant pollution in the area was suspected of being linked to the increased number of children born with deformities and residents dying from unknown diseases. I wanted to find out what was going on by meeting with people who lived near the oil fields.

Oil is South Sudan’s main source of income, accounting for more than 40% of its GDP, almost all of its exports, according to the World Bank. The government did not want any reporting that was critical of the lucrative business.

Getting to this area was challenging, as it has a heavy military presence. Few journalists have been able to report from there, especially since the civil war broke out in 2013.

I spent four days in Paloch and the nearby town of Melut, interviewing community leaders, residents, mothers who had lost children, and doctors who delivered deformed babies. I saw a junkyard full of chemicals that were seeping into the ground. The air was so toxic I was coughing for days afterwards.

The day I was scheduled to fly back to South Sudan’s capital, Juba, I was detained by a member of the country’s National Security Service at the airport in Paloch. I was taken to a small room in the airport and forced to hand over my phone, laptop, iPad, camera and notebook. I was allowed to board the plane to Juba but my belongings stayed behind. The security agents wanted to prevent me from publishing what I had witnessed.

Back in Juba, I still faced trouble. South Sudan’s National Security Service confiscated my passport, and for the next 11 days I was not able to leave the country and was called into the security offices many times for questioning. At the end of the day I was allowed to go home and sleep.

At first I was questioned by members of the oil company’s national security arm and later by the country’s Internal Security Bureau, intelligence officers within national security, at two separate facilities in Juba.

My belongings were flown from Paloch and I was forced to show the interrogators what was in my phone, camera, iPad, laptop and notebook. They accused me of working to prolong the civil war. They wanted to know my motives for talking to local residents about problems in the oil fields and they asserted that the people I interviewed were lying about the conditions they lived in.

The security officials refused to let me leave South Sudan for a scheduled reporting trip to Ethiopia. They threatened to send me to jail and told me I “wouldn’t be going anywhere for a very long time.”

Eventually I was released and my belongings returned to me. I was warned that if I ever wrote about pollution in South Sudan’s oil fields there would be consequences, most notably I’d never be allowed back in the country.

I was torn about what to do. Should I write the story immediately and get thrown out? Or stay in South Sudan longer and continue reporting on the civil war and the faltering peace process, and use my time in the country to further investigate the oil fields? I decided to stay, and for the next year kept digging up material for the oil pollution story.

Then, last October, South Sudan kicked me out.

While it was stressful, I was lucky that I was never physically assaulted or threatened. South Sudanese journalists, activists and people who speak out against the government can be arbitrarily detained, tortured, killed and thrown in jail for years.

I’m deeply grateful to everyone who supported and helped me during that time including South Sudanese who did so at great personal risk.

I was fortunate to have been able to report for as long as I did in the country and get to know and learn from the people of South Sudan who yearn for peace and stability. Even though I risk being banned permanently from South Sudan, I felt compelled to tell the story of the potentially devastating effects of the oil pollution.