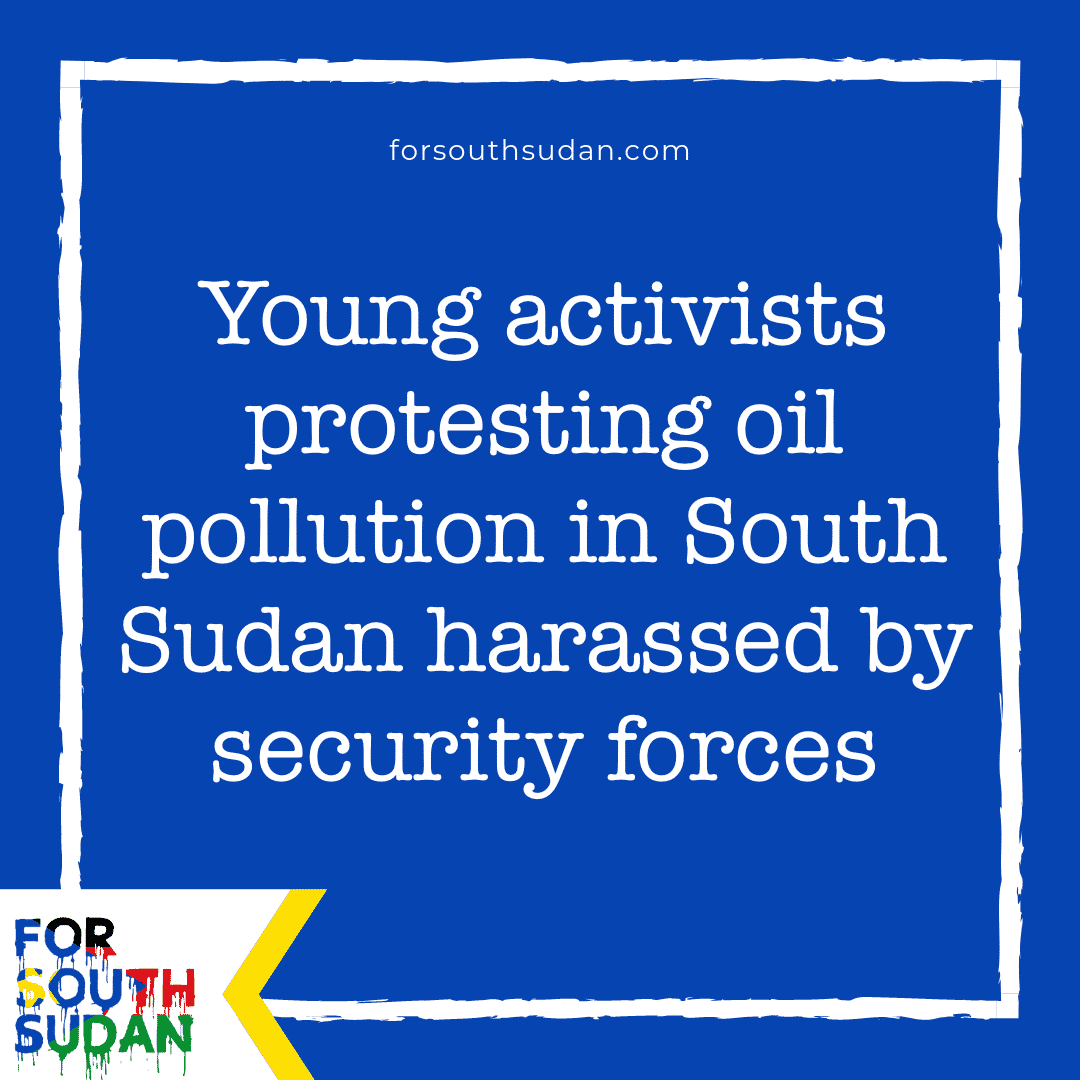 Young activists convened in Bentiu, the capital of South Sudan’s oil-rich Unity state, on October 16, 2020. The object of their peaceful protests: to get the oil companies to stop producing the pollution that has devastated their water and lands – and to live up to the agreement that they had concluded with the protesters a scant six weeks previously.

The protest was forcibly broken up by large number of security forces, resulting in the serious injury of a number of the youthful protesters.

The agreement’s ten points include the supplying of clean water, medical care and compensation to the thirsty and hungry victims of the oil pollution contaminating their groundwater, soil and air.

“The government, oil companies and their security forces are doing everything they can to do silence us. And for good reason. They don’t want the world to know what is going on here, to learn about the oil spills and leakages. Our situation is so desperate. We have no choice but to speak out,” states a young activist.

“Our peaceful protests had and have one objective: to try to set up a dialogue with the oil companies, one that would lead to their and the government’s living up to their commitments. Instead of talking with us, the security forces quickly jumped on us, pointed weapons at us, trampled us with their boots, and detained us for four hours,” states Johnson Galuak, the deputy secretary of the organization coordinating the event.

The breaking up of the protest has led to the activists’ issuing of an ultimatum.

Johnson Galuak explains: “Ever since South Sudan got its independence, we have had laws on our books that commit the government to providing us with schools, roads and other necessities of life and our share of oil revenues – in exchange for the pumping of oil on our land, and for the degradation of our environment resulting from it. These laws also commit the oil companies to producing in an environmentally and socially friendly way.”

“These laws have been systematically flouted. After eight years of a lack of social services and of compensation; after eight years of getting more and more hungry, thirsty and desperate, we have spoken out for our rights. And been roughed up for doing such.”

These protests have by now spread throughout South Sudan’s oil fields. The response by the government and oil companies has been harsh there as well.

“I saw young men get beaten and threatened. And all for trying to assert their rights as citizens and as farmers whose land has been poisoned. The sight of these young men crying in pain will stay with me for a long time,” says the leader of the women in oil-rich Koch county.

Local officials told forsouthsudan.com that the protesters’ release came after a phone call by Joseph Monytuil, who is governor of Unity state. The protesters’ demands remain unanswered.

Thus the situation remains unchanged in South Sudan’s oil fields, which are chaotic messes of derelict and decaying oil facilities and pipelines, swathes of contaminated land and waters, and villages rife with pollution and hunger and thirst.

And people suffering and dying.

Oil: the source of suffering in South Sudan

Justice on trial in South Sudan