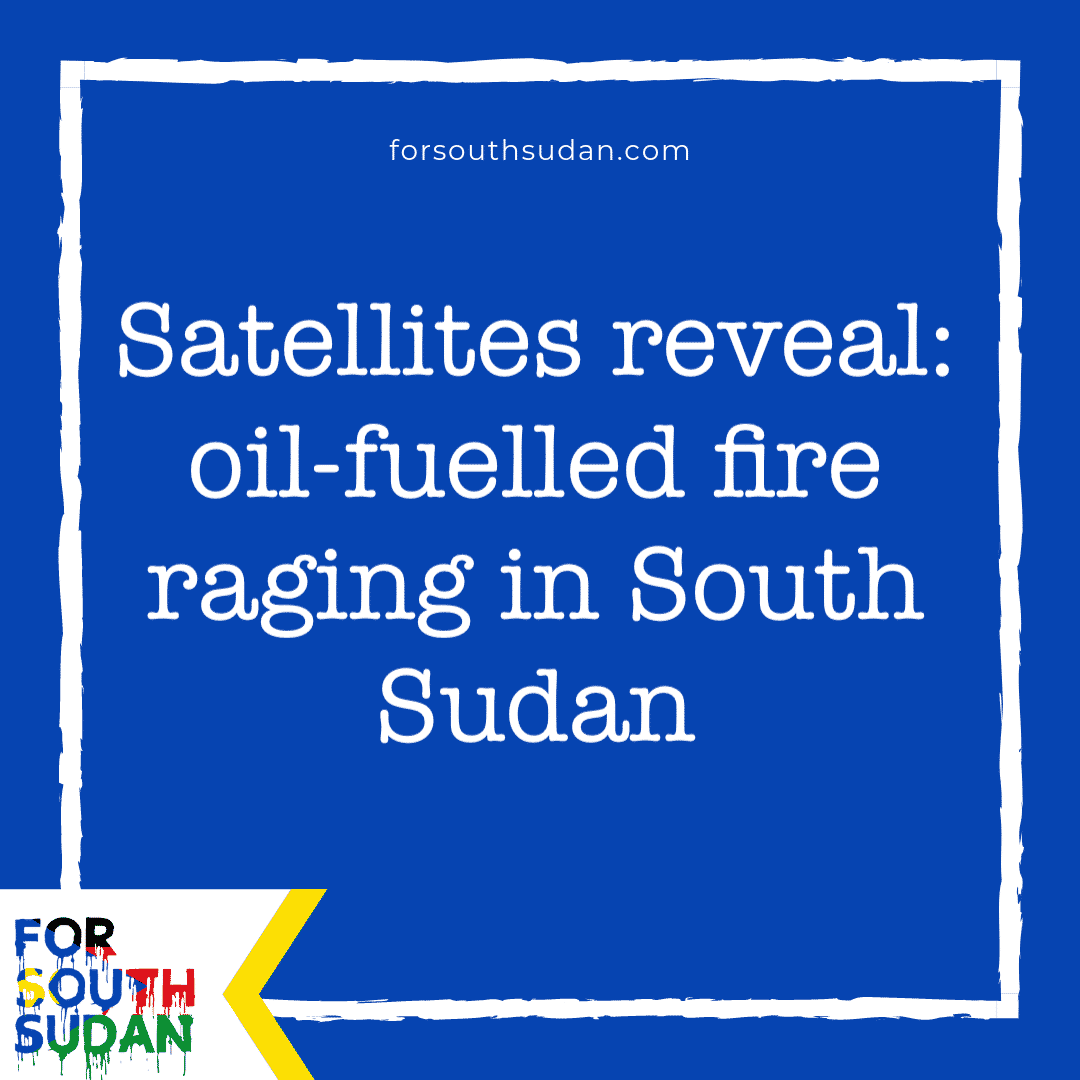 Satellite images reveal that an area in South Sudan’s Unity State that had been contaminated with oil wastes is on fire. Humans and the environment are suffering from the ensuing damage. These images lay bare the machinations of the oil industry.

Satellite images show that an area in South Sudan that had previously been contaminated with wastes from the oil industry has now caught fire. According to images taken by satellites on December 6, 2020, the fire is spreading at precisely the spot – which is located about 33.5 km north of the town of Rubkona and close to the road to Heglig – at which the dilapidated main export pipeline had ruptured. This rupture took place on or around October 28, 2019. The rupture spilled some 4 million litres of oil on to an area of about 20,000 m2.

The pipeline was subsequently repaired by GPOC, the consortium responsible for operating it. GPOC failed, however, to undertake a complete and proper disposal of the leaked oil, according to Sign of Hope’s observations. The oil’s combustion is responsible for the large cloud of smoke billowing over the area.

Klaus Stieglitz, Sign of Hope’s vice chair, explains:
“During our regular satellite-based reconnaissance, we discovered on satellite imagery taken on December 6, 2020, that an area measuring about 280 m x 900 m was in flames. On February 25, 2020, we published a report (https://www.hoffnungszeichen.de/sites/default/files/documents/causing_a_black_tide_of_oil_-_south_sudans_polluting_pipeline_-_sign_of_hope.pdf) in which we proved that the oil pipeline had broken at exactly this location.”

Stieglitz: “In our report we emphasised our demands for a proper and comprehensive disposal of the oil and associated wastes issuing from pipeline ruptures. It appears that the incomplete and improperly disposed of oil that leaked from this pipeline has now caught fire. What we see here is a catastrophe that was literally waiting to happen. The fire and the resulting huge clouds of smoke have a serious impact on peoples’ health and the environment”.

Stieglitz concludes: “We have the impression that the oil industry – led by the Malaysian oil giant Petronas – is exploiting the weakness of the corrupt Southern Sudanese state to produce oil at the cheapest cost – at the expense of man and nature. This must stop now. Spilled oil must not be left in the environment, because the combustible material is an environmental powder keg that can catch fire with a small spark. This is exactly what has now happened near Rubkona. Using satellite reconnaissance we will continue to keep a close eye on the oil industry’s greedy deeds.”

Hoffnungszeichen | Sign of Hope e.V. is a Christian motivated organisation for human rights, humanitarian aid and development cooperation. From its base in Constance, Germany, Sign of Hope is committed to helping those in distress and exploited people worldwide.