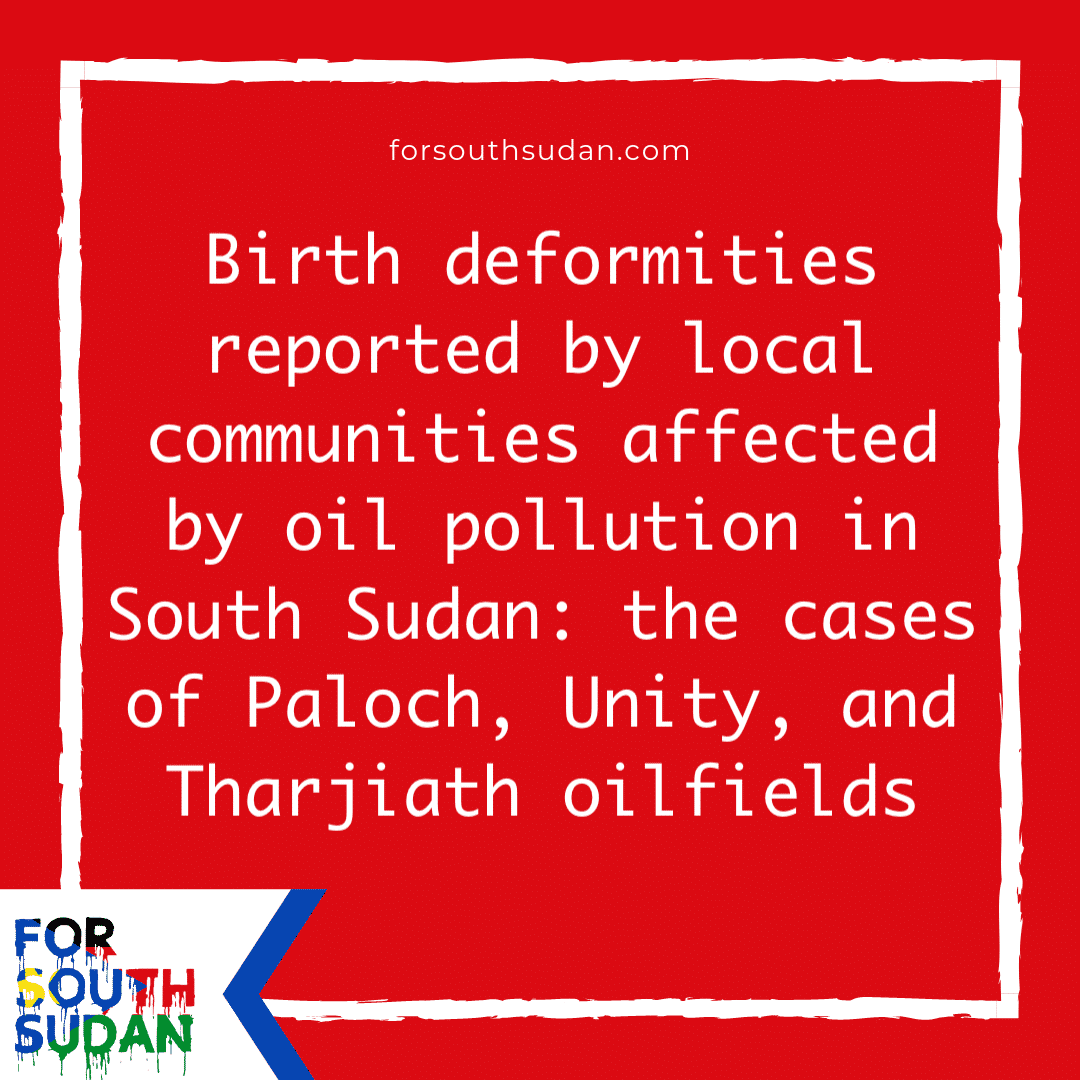 The oil industry has turned swathes of South Sudan into a ‘landscape of pollution’.

The country’s surface is pocked with hundreds of unsecured pits. They contain a ‘witches brew’ of toxic chemicals and of such heavy metals as mercury, manganese, arsenic, lead and cadmium. These poisons then seep from the pits into the ambient water, and from there into the entire ecosystem – where they join the oil spilling and leaking from ruptured pipelines and defective and derelict facilities in contaminating it, according to articles appearing in the Associated Press and elsewhere

The effects of exposure to and ingestion of these poisons upon human health are well documented – cancer, loss of cognitive functions, circulatory and respiratory impairments, stillbirths and many others.

The cumulative effect of two decades of environmentally and human health-negligent production and transportation of oil in South Sudan: the country has the seventh highest rate of pollution-related deaths in the world, according to the Global Alliance on Health and Pollution.

Hardest hit by this devastation of health have been the most vulnerable: fetuses and infants.

A study by a local advocacy group (which has asked to remain anonymous) found that deformed infants comprised 19% to 54% of all births in a three-year period (2015-2017). The group found that one community (Ruweng in Pariang) had up to 118 cases of premature deliveries during the period. Such deliveries can be triggered by exposure to toxins.

These deformities are of an unprecedented severity, reported the AP on February 13, 2020. It cited four personally-experienced cases: a baby born with six fingers on his hand, one stunted leg, a deformed foot and a swollen kidney; a baby with her intestines outside her body; a stillbirth with a concave head; and, finally, another baby born dead. It had neither eyes nor a nose.

My research unearthed a number of further horrible deformities.

In December 2019, I conducted such research in the communities of Koch and Rier, which are located in the vicinity of the Tharjath oilfield.

To that end, I interviewed a number of residents. A pastor reported the birth of two deformed babies: In September 2018, a child was born in the town of Rier. The child had one leg. In November 2019, a baby was delivered in the town of Koch. The child didn’t have eyes.

A further report – of a baby with a deformed head – was received on February 1, 2020 by the Sudd Environment Agency. The parents said that the child had been born in the Mirmir Primary Healthcare Center. As is the case with the others, the child’s parents are convinced that the deformity is linked to the extensive contamination of the environment by the oil pollution issuing from the operations the SPOC consortium.

Taking the historical perspective, reports of such deformities began appearing upon the commencement of the production of oil in South Sudan in 1999. These reports have routinely met with a lack of concern or even response by the government of South Sudan and by the oil consortia.