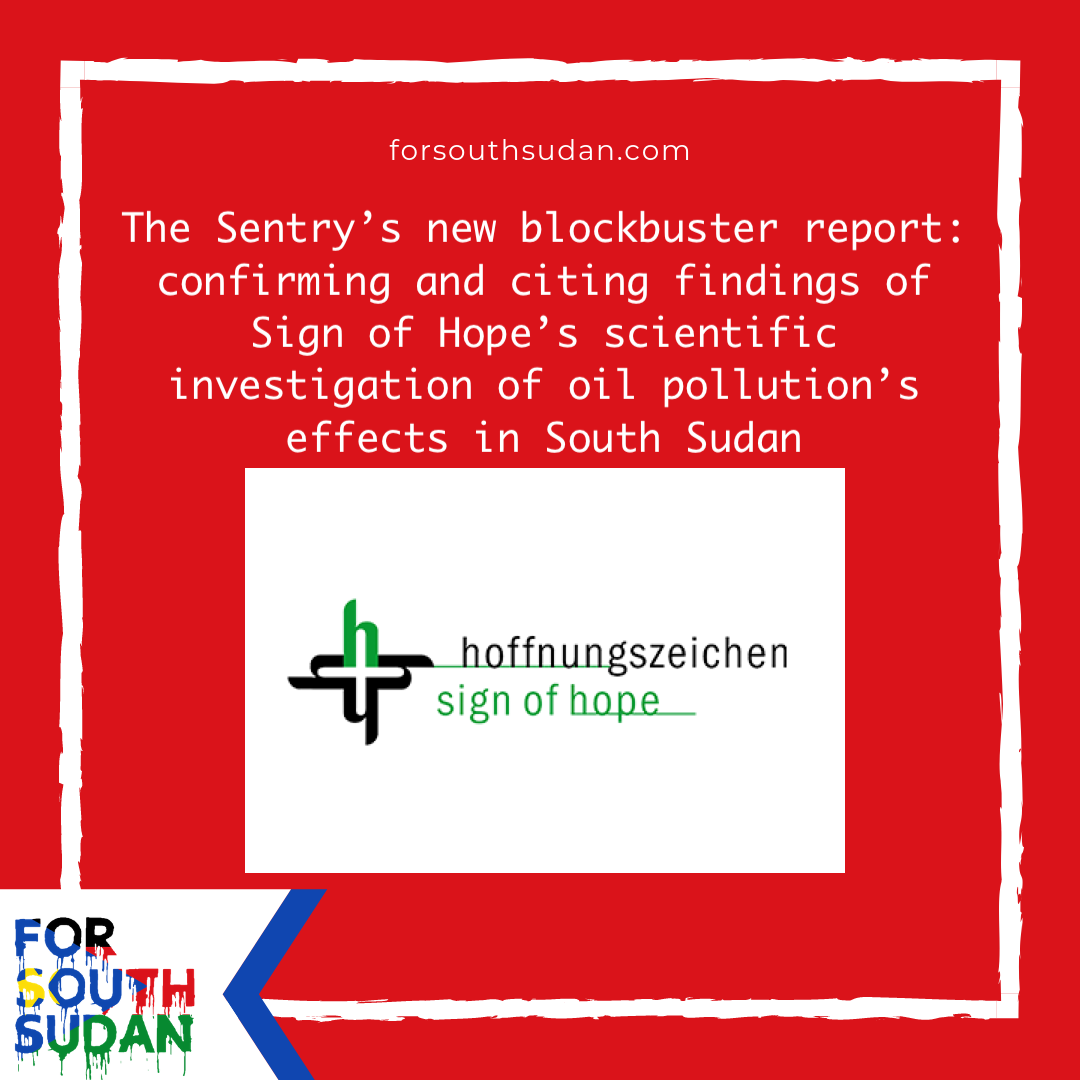 “The Taking of South Sudan”

“Klaus Stieglitz, vice-chairman of the Konstanz,Germany-based non-profit organization Sign of Hope that has previously investigated pollution
concerns in South Sudan, speaks of an “oil catastrophe” affecting more than 600,000 people.”

“Extremely high” and “elevated” levels of heavy metals – such as lead and mercury – and of dangerous chemicals – such as PAHs, TPH and BTEX” – often linked to infant stillbirths and deformities – found in and around oil fields

Widespread and vociferous protests by local residents and officials have been stifled and ignored by government.

This contamination of water and land has been caused by the widespread and deliberate failure to adhere to environmental standards by the Dar Petroleum Operating Company – in which Petronas of Malaysia and China National Petroleum have major equity stakes.

Quoting from  the report:

Hazardous Waste
Oil production in Paloch and Adar has contaminated the environment and threatened the health of the
adjacent population in Upper Nile state. An unpublished study commissioned by Dar Petroleum about
the management of hazardous waste associated with its oil production in Upper Nile shows the extent
to which the company is aware of its role in the environmental damage.

Prepared for Dar Petroleum by consulting firms Envirocare and Enviroserv, the internal study documents
found elevated levels of heavy metals and several dangerous chemical compounds in sites around
Dar Petroleum’s production facilities. In some instances, the researchers warned of “extremely high”
levels of dangerous chemicals. At dumpsites near the oilfields, the researchers found that high levels
of accumulated lead and mercury, and some waste pits had elevated levels of arsenic. In numerous
locations, the researchers found heightened levels of polycyclic aromatic hydrocarbons (PAHs), 66 a
class of chemicals produced when petroleum, coal, garbage, wood and some other products are
burned. 67 The study also documented elevated levels of benzene, toluene, ethylbenezene and
xylenes—a group of compounds associated with oil production collectively known by the acronym
BTEX.
The study paints a grim picture of waste management at Dar Petroleum’s facilities. “The yard is visibly
contaminated,” it said of the Adar oilfield. Images included in the study of waste sites at Dar Petroleum’s
facilities resemble open, unkempt garbage heaps. Mud pits at the oilfield used to store waste were
compromised “as a result of liner decay, damage and theft,” the report found. 68 Dumpsites that
contained “high levels of lead” and “extremely high levels of PAHs, BTEX and TPH” were characterized
by “inadequate housekeeping.” And at Paloch,“chemicals washing out of the former yard has lead to
contamination of areas outside” Operational Base Camp. The contamination thus extended beyond
Dar Petroleum’s facilities.
A November 2018 report presentation by Dar Petroleum depicts observations at chemical yards and
landfill of Dar Petroleum facilities taken as part of an integrated hazardous waste management feasibility
study.

Upper Nile residents have long raised concerns about the public health impacts of oil-related pollution.
“Oil production pollutants are suspected by communities to have caused many new health problems,
such as increased infertility in women, a higher number of miscarriages, and eye and skin problems,” a
2014 study by Cordaid found. “According to medical staff in Melut and Koch, a link between the pollution
caused by oil production and some of these health problems cannot be excluded. Communities are not
made fully aware of hazards associated with the production of oil.” 69
“EnviroServ Uganda, as would be expected, respects the confidentiality of client information and thus
is not willing to share findings and information from the report,” a representative from the company
wrote in an email in response to questions posed by The Sentry in September 2019. “[Dar Petroleum] has shared the report with the relevant authorities in South Sudan.”

The known public health consequences of exposure to chemicals identified at Dar Petroleum’s
facilities are significant and reflect similar concerns. Exposure to PAHs can harm fetal development. 70
Benzene is a known carcinogen, with the World Health Organization describing Benzene as “a major
public health concern.” 71 And high short-term exposure to metallic mercury can also cause a range
of medical ailments, including lung damage and elevated blood pressure or heart rate, according to
the International Petroleum Industry Environmental Conservation Association. 72

Klaus Stieglitz, vice-chairman of the Konstanz,Germany-based non-profit organization Sign of Hope that has previously investigated pollution
concerns in South Sudan, speaks of an “oil catastrophe” affecting more than 600,000 people. 73

Black Tide in the Niger Delta