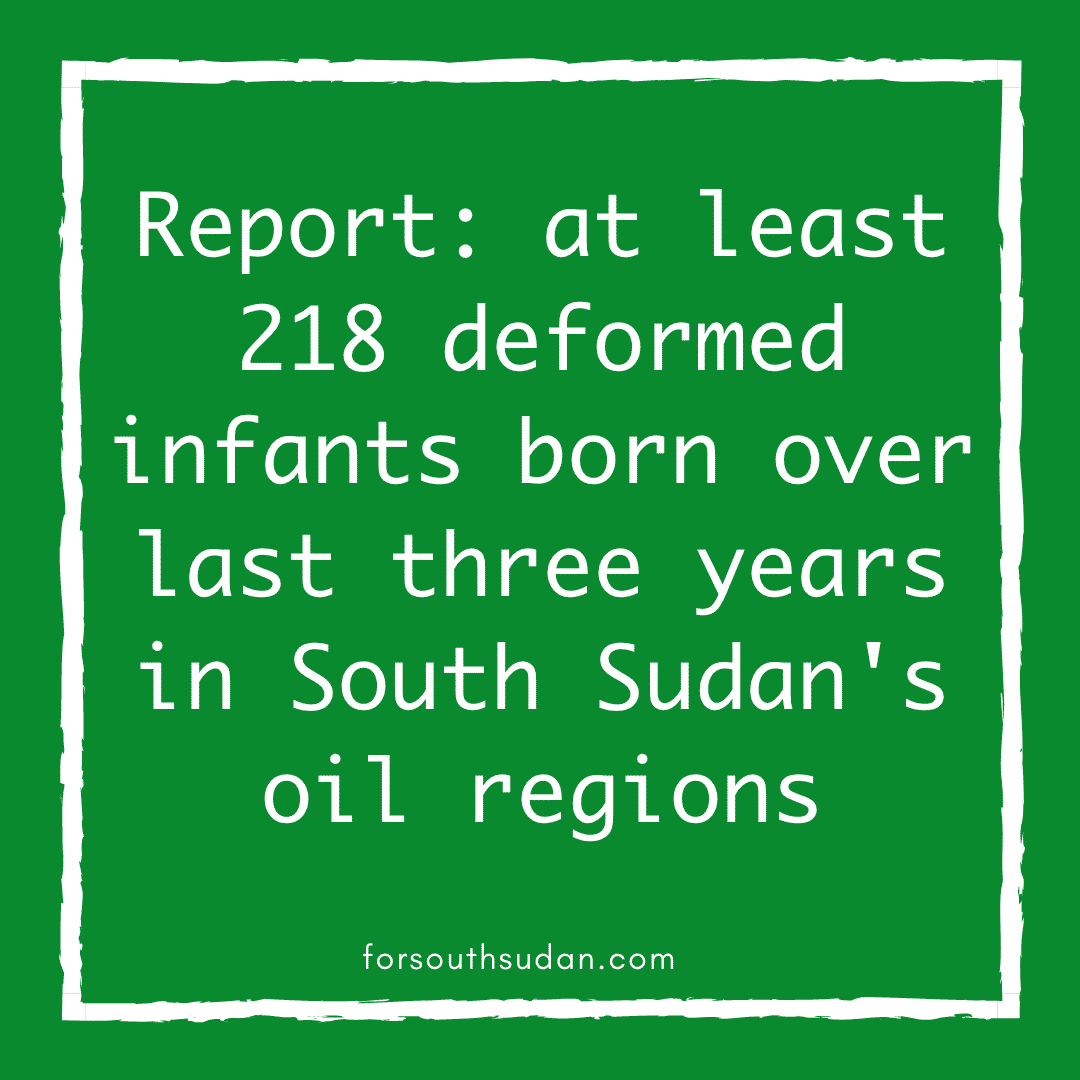 Billions in profits for China National Petroleum, Petronas of Malaysia, ONGC of India and other companies holding stakes in oil consortia in South Sudan.

Millions of victims of these consortia’s pollution of environment – via oil spills, wastes, leaks and fires.

Including the most helpless of all: fetuses.

Over 200 children born with deformities in oil fields

A new report has suggested that more than 200 children were born with deformities caused by suspected environmental pollution in the oilfields.

A  research firm, Nile Initiative for Health and Environment, says it recorded over 218 cases of birth defects over the last three years.

These are results gathered from all the oil fields in Unity, Upper Nile states and Ruweng Administrative Area.

“We looked through the birth registry and counted the incidents in which women came in and gave birth to deformed babies, so that number that we have recorded came from all the oilfields but the majority of it came from Pariang,” said Dr. Bior Kuer Bior, founder.

“Part of the number came from many reports that have come to us from many media outlets and also our own assessment at Pariang Teaching Hospital.”

The non-profit organization released the report in Juba last week.

Dr. Bior told Eye Radio that the number could be more because some cases have not been registered by the hospitals.

“The records we have are not really that compressive, so it is possible that other incidents that have gone unrecorded may also still be there,” he stated.

Both local and international campaign groups say women are giving birth to deformed babies and stillbirths, claims the local people have confirmed.

In 2015, a scientific study by a German human rights and relief organization— Sign of Hope said the health of more than 180,000 people in the oil-producing areas was at risk due to drinking water contaminated by crude oil.

These figures do not include those who live in remote areas with no hospitals and roads to connect them with state headquarters.

Dr. Bior said that their assessment discovered that the provisions of the Petroleum Act 2012 have not been implemented by oil companies.

“The finding is that the act is not being implemented with respect to environmental protection and we are urging the ministry of petroleum and the oil operation companies to look at the act one more time and make sure that it is implemented,” he continued.

“All the issues that are happening in the oilfields with respect to the environment can be mitigated if the act is implemented.”

Help us put an end to oil’s pollution of water