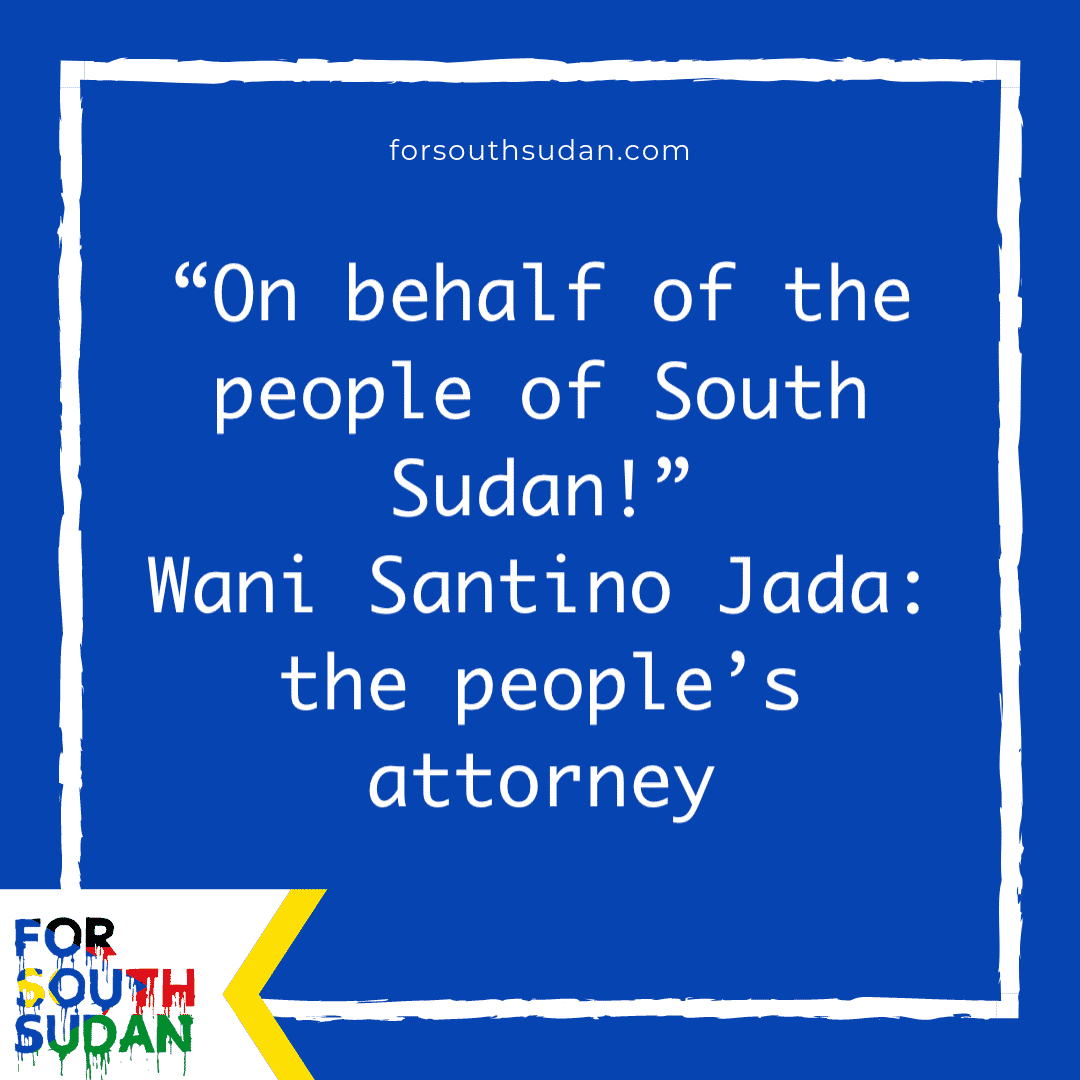 His lawsuits are breathtakingly courageous and important.

His life would make a riveting movie, one as exciting as “Hotel Rwanda”. Meet Wani Santino Jada. Wani’s current lawsuits are hugely ambitious and utterly important. They strive to bring South Sudan’s oil industry to a halt – and with it, the “Black Tide” of oil and its wastes that are washing through the country’s environment. give the victims of this pollution what they need to survive: the money required to rebuild their lives and to get treatment for the grievous pollution-caused ailments. Wani’s current lawsuits are taking on

one of the world’s most repressive governments – that of South Sudan. Its National Security Service has a long and well-documented track record of summarily dealing with anyone daring to criticize the government. several of the world’s largest and most powerful companies – including China National Petroleum and Petronas of Malaysia – and the hugely dominant oil industry as a whole. Wani’s life:

He was born in what was then southern Sudan in 1989

In 1993 , the civil war in Sudan forced his family to flee to Uganda.

Though desperately poor, Wani’s family were determined that Wani would get an education. By making great sacrifices, they achieved that.

Wani himself worked himself to the bone to get schooling.

To get money for shoes to wear – a necessity for going to school – Wani – although only 8 years old worked afternoons in a quarry crushing rocks.

To pay his school tuition, Wani collected and sold firewood.

To get the funds for Wani’s enrollment at a university, his uncle sold his one asset – his land. Admitted to the bar in 2016, Wani embarked upon his path of fearlessly seeking to right injustices.

In 2017, he became the first attorney from South Sudan to lodge a suit with the East African Court of Justice, which has jurisdiction over that and five other countries.

In a courageous move for any attorney, but especially for one embarking upon his career, Wani sued the government of South Sudan at the EACJ. The suit was meant to force the government to adhere to the stipulations for the electing of representatives to the six-nations East African Community. The suit was successful – and precendent-setting.

The government of South Sudan was also a respondent of a subsequent lawsuit. Filed in 2019 with the EACJ, the suit sought information from the government on its possible role in the abductions and murdering of Aggrey Ezbon Idri and Dong Samuel Luak. The kidnappings took place in January 2017 in Kenya, the murders allegedly a few days later in South Sudan. The culprits are said to be agents of the government. The suit demanded of the government the deliverance of the bodies.

Aggrey Ezbon Idri was a South Sudanese politician whose principled opposition to the dictatorial regime of president Salva Kiir had forced him to flee to Kenya.

Dong Samuel Luak was one of the leading attorneys in South Sudan. His advocacy of human rights in the country had aroused the ire of the government and his agents. At the time of his abduction, Dong Samuel Luak was under the protection of United Nations High Commission’s office in Nairobi.

These lawsuits were filed by Wani’s firm Pan African Law Chambers on behalf of Hope for Humanity Africa, the NGO co-founded by Wani in 2017 to provide an institutional framework for his and others’ efforts on behalf of the people of South Sudan.

The people of South Sudan are very appreciative.

Here’s what has been posted in the social media recently:

“Wani you are our hope”

“Wani we have no money to support you. What we do have to offer is our prayers for your success. Your lawsuits inspire us to keep on hoping for a better life.”

“Our lives are at stake!”