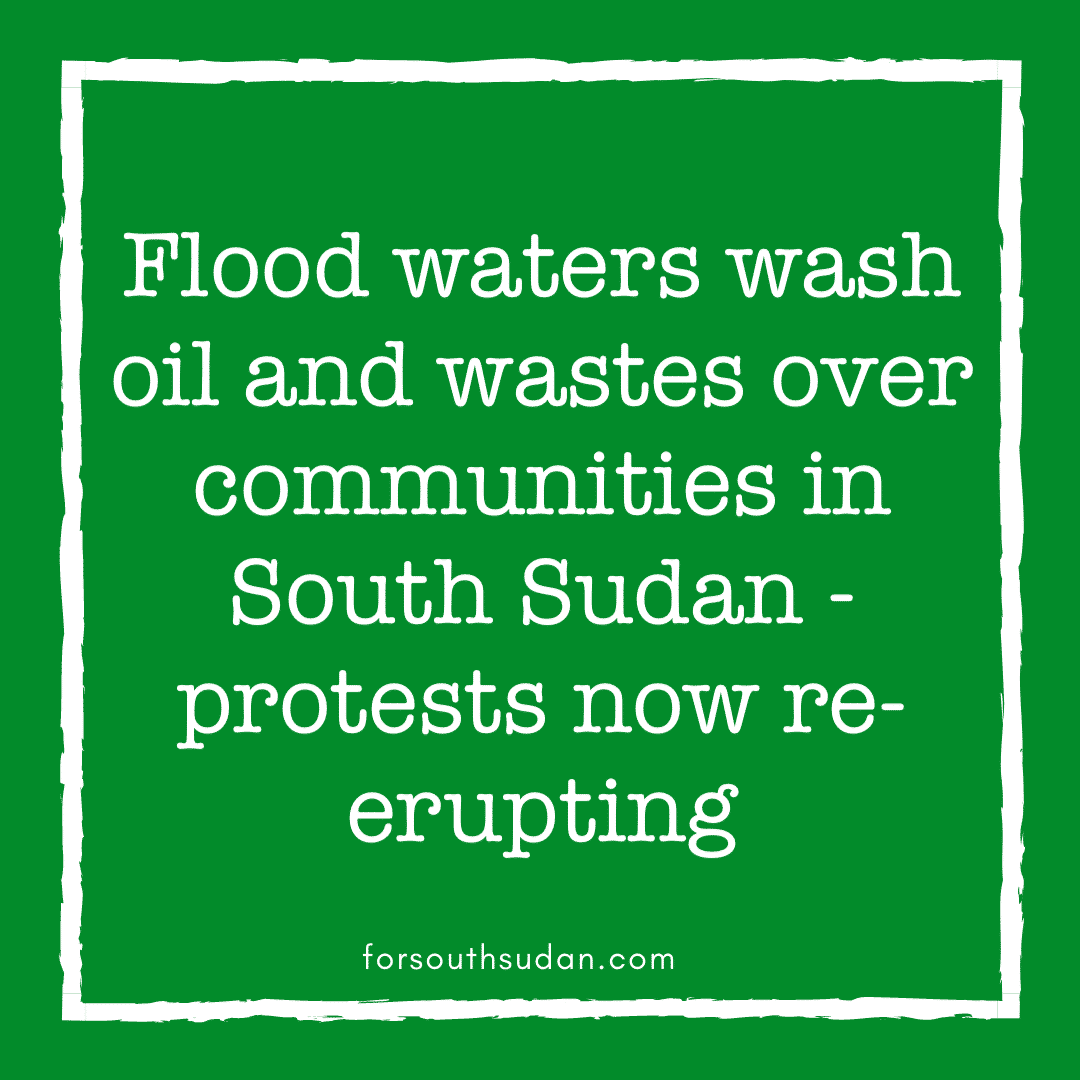 Weeks of torrential rain in South Sudan have flooded oil wells and ‘related facilities’ in South Sudan, the country’s ministry of petroleum reported on October 13, 2020.

As these ‘related facilities’ include ponds containing witches’ brews of oil wastes, unsecured and abandoned containers holding ultra-toxic chemicals and derelict and leaking pipelines, the flood waters are flushing contaminants over the communities, farms and grazing areas in their paths. These are located in the Koch, Leer and Rubkona regions.

The flood waters are now seeping into the ground, causing the groundwater – already contaminated with lead and other oil-stemming pollutants – to rise.

What this means: local residents are facing a double whammy. Their homes are being inundated by water and wastes from outside and below.

Making this indescribably bad situation even worse: rather than rushing to the floodwaters’ victims, the government of South Sudan and the two main oil companies are actively hampering those trying to rush to their assistance, states Magok Maluit, a leader of local youth.

“The flood waters smell incredibly foul. They are bringing with them diseases and a further rise in lead and other forms of poisoning,” he adds. “And the government and the oil companies simply refuse to do anything – and allow anything to be done.”

“They don’t care about us at all. And we have to find some way of making them care,” says a woman whose home got doused with oil wastes.

What this lack of concern and remedial action will probably produce: the next chapter in the story of the uprising of residents against oil pollution-caused suffering.

In late August and early September, the residents staged a series of “PEDs” – ‘peaceful environmental demonstrations’ – in and around oil fields, effectively blocking access to them.

These protests were successful – initially. The ministry of petroleum rapidly agreed to a 10-point plan of immediate action. The plan includes the supplying of pipelines-born fresh water, and of compensation for loss of life and livelihood, and the building of hospitals and schools.

Weeks of inactivity on the part of the government caused victims’ groups from Koch, Leer, Tharjath and other oil-filed regions to convene.

This “summit meeting” produced an ultimatum: the government of South Sudan has to rapidly live up to its promises – or face the consequences.

A year of oil pollution-caused ecocide and resistance in South Sudan: key articles