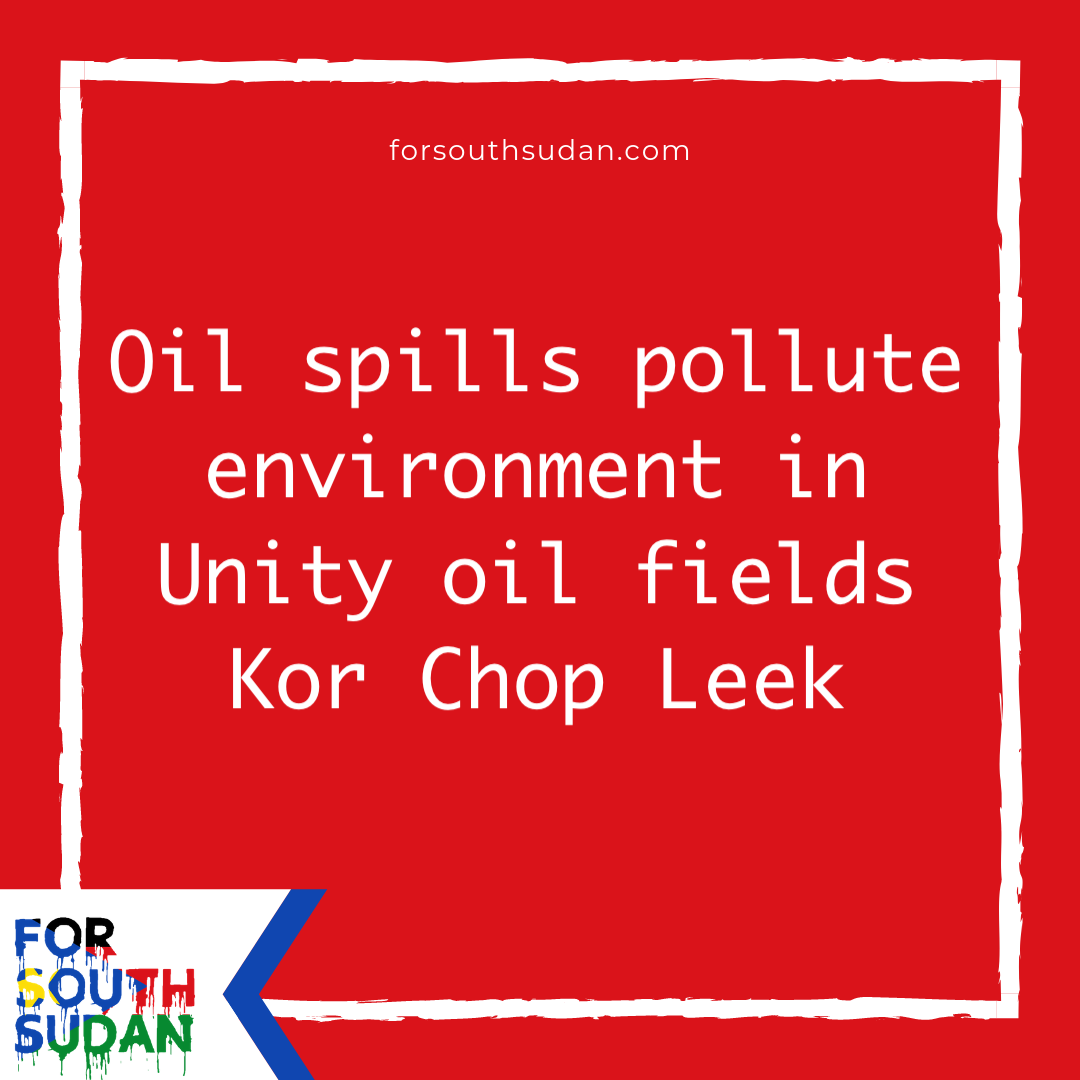 There was a serious leak of crude oil on December 18, 2019. The leak was in the Unity oilfields, which are operated by the Greater Nile Petroleum Operating Company, whose major shareholders are China National Petroleum Company and Petronas of Malaysia.

The area had already been subject to considerable contamination by oil and related wastes. The situation got much worse on December 22, 2019. A grass fire encountered the leaked oil, combusting it. A huge, smoky fire was the result. This has further worsened the situation faced by local residents, who are already dealing with the poisoning of their water and land.

Neither GNPOC nor the government of South Sudan has released a statement on this situation.

According to Lam Tunguar (in a statement quoted by Radio Tamazuj), who is the minister of infrastructure for the state of Northern Liech, the fire ensued from herders’ having engaged in their practice of burning off dry grass in the locality of Budaang Payam, which is located in Rubkona county. The herders were not aware of the grass’ having been inundated by oil leaking from local pipelines.

Lam Tunguar’s statement accuses the oil companies of having failed to protect the environment. His concern and anger are echoed by Sudd Environment Agency, a community rights protection agency in South Sudan, and, as well, by a large number of other environmental and human rights activists.

The oil companies’ contamination of the environment has made life unbearable for the thousands of the people living near the oilfields. These people lack clean water. Their consumption of poisoned water has given rise to their experiencing many new and grave ailments. Women have given birth to deformed infants. Another product of the pollution has been a rise in infertility.

This tragic poisoning of the environment has repeatedly been brought to the attention of the government of South Sudan – and that of the entire world – by local authorities and residents, and by national and international organizations. All have called upon the oil companies to respect human and environmental rights – and to put an end to their pollution-causing and health-damaging practices.

These calls have not been heeded.

For that reason, the author is issuing the following urgent appeal. It is addressed to GNPOC and to South Sudan’s ministry of petroleum and mining.

It is a time for an immediate intervention. It is time to provide compensation to the people affected by the oil spills and by the contamination of their environment in general. Of great importance is the presentation by the oil companies of the plan for environmental protection, remediation and compensation stipulated by the Oil Act of 2012.

The author is a concerned South Sudanese who is reachable at korpuoch@gmail.com.

From the report compiled and published by UNEP

21 years of unhindered oil pollution in South Sudan: the facts! Report to UN