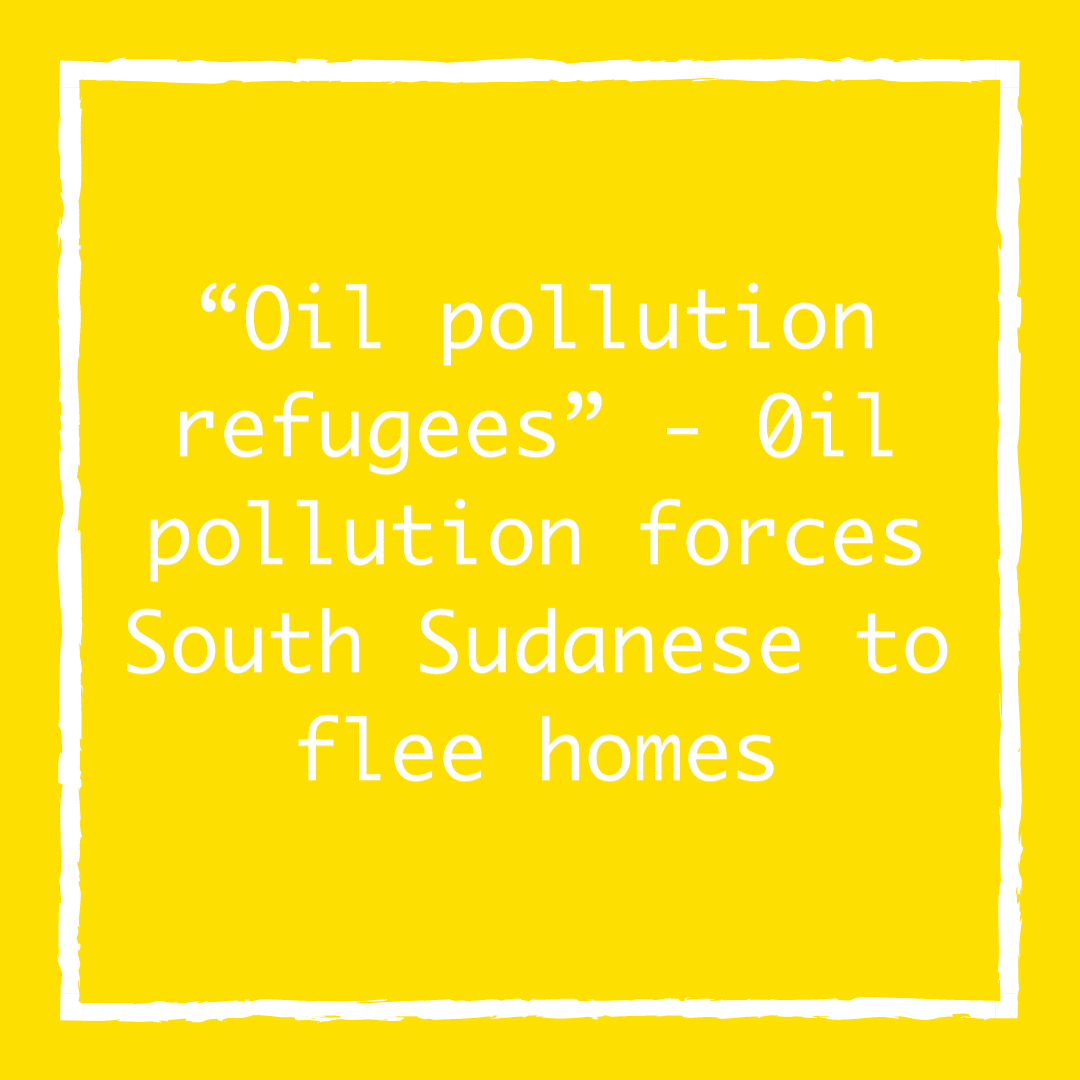 Oil contamination struck again in the Paloch region, which is located in northeastern South Sudan.

Over a one-week period, a further 11 families abandoned their homes in the region – in a desperate attempt to escape the effects of oil pollution upon their unborn and young children.

Caused by oil issuing from spills and leakages and by related wastes, these effects include horrifying deformities and chronic lead poisoning – with all of its attendant impairing of physical and mental performance.

According to Mabior Isaac, who is one of the leaders of the young in the Paloch region, these 11 families are the latest in a large number of “pollution refugees”.

“These ‘refugees’ couldn’t stand the conditions of life here any longer. And they couldn’t hold on any longer to any hopes they may have had of getting governmental relief for – or at least attention to – their problems.”

As Mabior Isaac points out, the number of families leaving for the relative safety and healthfulness of the northern Renk area or even Sudan is directly related to their proximity to the oil wells and processing facilities.

“The closer the families, the worse the conditions,” he states.

This exodus has been triggered by the spate of births of horribly deformed babies – four known cases in one week alone – in the Paloch region.

Abject poverty is the other main trigger of the exodus.

“First the oil companies grabbed and poisoned much of our land. Then they failed to provide us with employment or indemnification. And if you try to assert your rights to your land, to clean water, and to a healthy environment as a whole, you’re running the risk of being picked up and taken off to detention,” states a local youth activist.

Hope of treatment of getting help for the deformities and for the ailments ensuing from oil poisoning is a further driver of the flight.

“One of the families that left last week for Renk has a deformed child who is barely capable of breastfeeding. As we said goodbye to them, we realized we may never know whether or not the family found a new home, or if the child survived,” states local resident Emmanuel Deng.

“The number of mothers not being able to conceive is growing, as is the number of our dead livestock,” states a local woman. She adds: “Living here is like being cursed. The oil companies and the government have taken our oil, and in exchange we have gotten untreatable ailments and massive destruction of the environment.”

The general consensus among the people in South Sudan’s oil-producing regions is that the oil consortia and government are untrustworthy – that they have an ever-greater track record of not living up to the commitments they made to correct their abuses of human and environmental rights.

Among the key promises made by such consortia as Dar Petroleum Operating Company: to remediate the land contaminated by oil and its wastes, and to provide new homes for the people living on land incapable of being cleaned up.

The net effect of these failures: South Sudan is risking have a generation of people crippled by chemicals and heavy metals – and impaired by the effects of malnutrition.

South Sudan – one of the most corrupt countries