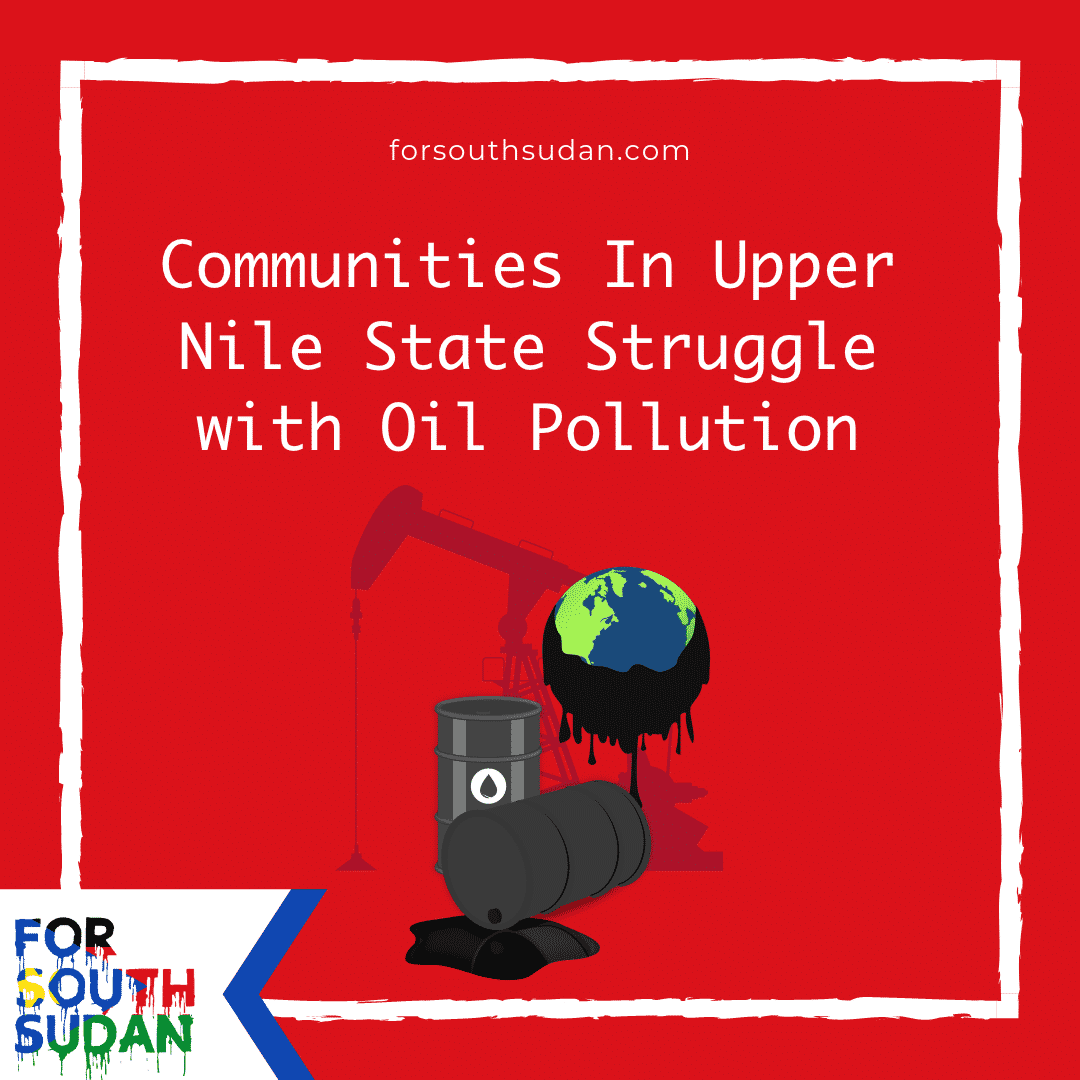 Villagers in South Sudan are starving.

Because oil spills  – 21 in one area within five years – have destroyed their farmlands’ fertility.

Because these spills have not been cleaned up by China National Petroleum Corporation – although the giant company is legally obligated to do such. Nor has CNPC provided victims with the compensation demand by regulations – national and international.

This pattern is common to the entire oil-prroducing region in South Sudan – devastating it.

Victims are now standing up for their rights.

The government of South Sudan’s failure to address their demands is a “keg of gunpowder”.

Martha Adeng used to harvest 15 bags of sorghum each year before an oil spill forced her to abandon her field and hawk milk to survive.

Her smallholding at Lualdit, a community in southern Paloch Upper Nile state, became unfit for growing crops after crude from a nearby CNPC facility spewed into the environment last August, she says.

Today, the 36-year-old mother of two looks upset and helpless, her anguish compounded by downpours during the last rainy season that flooded her land.

“The soil has become infertile because of the spills,” Martha told SSW.

“Each time I remember the spills and now the floods, my heart bleeds,” she said.

“People from CNPC came and promised to do something for me. until now I have not heard anything from them.”

Lualdit, a collection of villages, is one of the most polluted sites in the oil and gas-rich Melut Basin Upper Nile State.

A major pipeline that passes through the pastoral and farming community of 33,000 people has been the subject of spills and rebel attacks for several months during the South Sudan civil war.

Overall, rights groups say that millions of barrels of crude have leaked out across the State over the years.

The oil companies blame most of the leaks on sabotage from local residents and criminal gangs stealing the crude.

But under South Sudan laws, the firms are obliged to clean up all spills whatever their cause.

Villagers argue some spills are due to operational factors.

“It’s not completely true all the incidents are caused by sabotage. Some of them are due to equipment failures,” Lualdit community leader Paul Deng told SSW.

Asked about the allegations from the residents of Lualdit, CNPC insisted it meets its obligations on all clean-ups and helps affected communities whatever the reasons for the leakages.

“CNPC has always and will always live up to its responsibility,” spokesman Akuien Mayen told SSW.

“The problem we face is re-pollution. After we clean a site, the vandals will go back and damage the facility to steal the oil without considering the negative impact on the environment.”

How it ‘Destroyed the ecosystem’

In oil-rich Melut Basin, it took a 2011 United Nations Environment Progamme (UNEP) report before the government try to launched a clean-up of the spills in the area that looks set to last some 60 years.

In Paloch Oilfield, where crude was discovered in 2003, the locals live in abject poverty. No jobs, roads, hospitals and schools.

The Paloch oil well B4 no longer produces and is overgrown with weeds, while the residents drink and wash in stream water.

A government promise in 2018 to erect an oil museum in Paloch as a monument to the oil well is yet to be fulfilled.

Locals and environmental campaigners say oil companies such as CNPC, are not doing enough for host communities despite many years of oil exploration in the area.

South Sudan is one of Africa largest producer of oil, it produces an average of three hundred thousand barrels of crude per day, which accounts for 98 percent of foreign exchange earnings.

“The oil firms have destroyed the region’s ecosystem through their operations,” said Michael Dau of Environmental Rights Action lobby group.

He said the people’s mainstay of farming and pastoralism has been ruined without providing an alternatives, forcing local residents to engage in criminality for survival.

“That’s why incidents of bunkering, oil thefts, pipeline vandalisation and illegal refineries will continue in Melut Basin,” he said.

He said only very few South Sudanese are benefiting from oil money, while millions of people eke out a living on less than two dollars per day.

For him, the only way to avoid spills is do away with oil production entirely.

“We should stop oil production in South Sudan because of its negative impact on the people and the environment and focus more on renewable energy,” he added.

Ngor Diing of Melut Basin Civil Society Group said the nation is “sitting on a keg of gunpowder if nothing is done to address the grievances of the oil-producing communities”.

He said rather than being a benefit, “oil has been a curse for the people”, adding that there was little or nothing to show for the millions of dollars made from the sector.

“Our situation is like someone who lives at the bank of a river but washes his hand with spittle,” he said.

He recalled the unrest in the State in the early 2014 by militia seeking a fair share of the nation’s oil wealth for the local people. Months of militia attacks on pipelines and oil infrastructure slashed South Sudan output to less than a third at the time, hurting government revenues.

Oil: the source of suffering in South Sudan