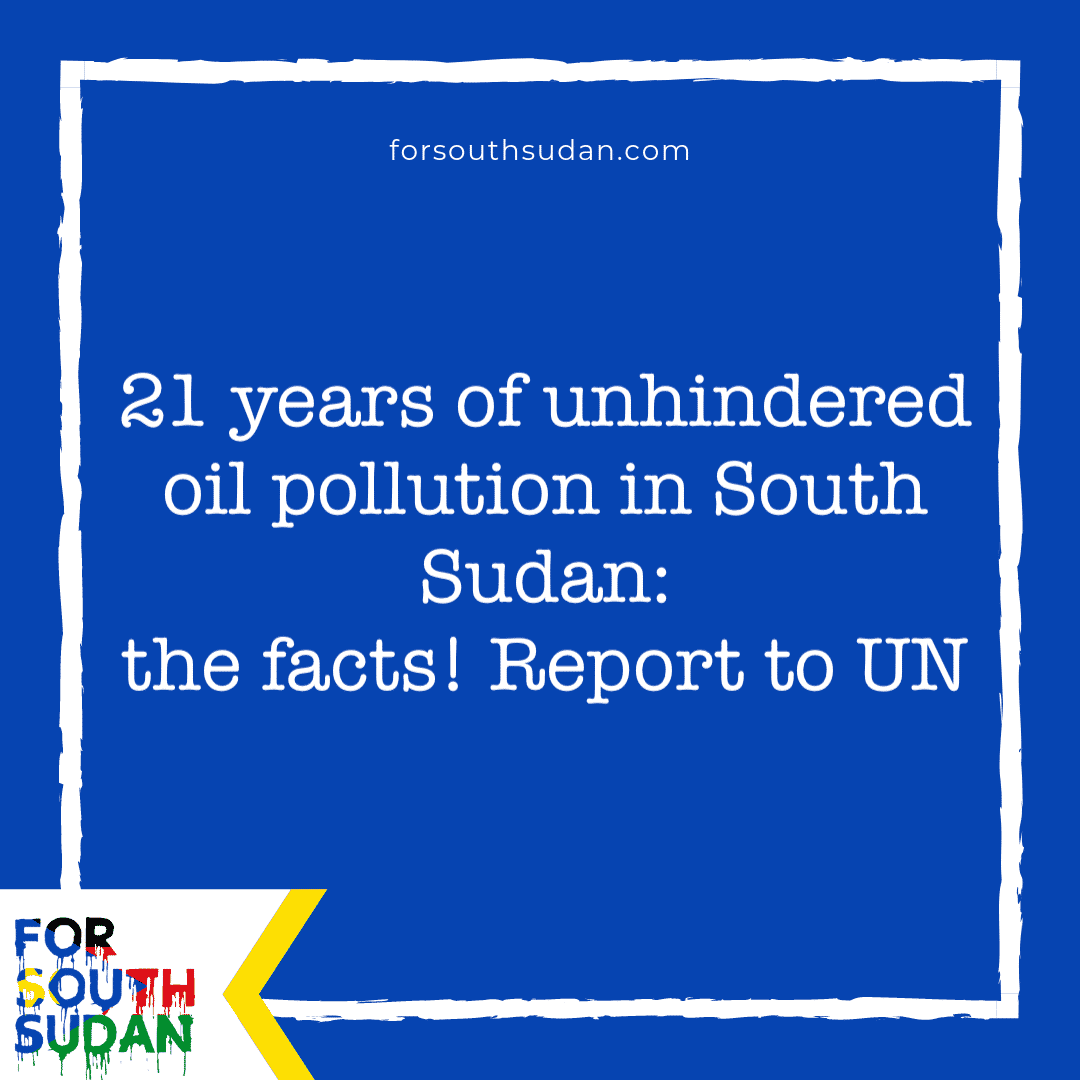 On February 22, 2021, Sign of Hope, the Germany-based humanitarian and environmental NGO, submitted its report “Calculation of environmental contamination from oil production in South Sudan”.

it details a sheer unimaginable ravaging of human and environmental health by oil companies – notably China National Petroleum and Petronas of Malaysia – and their allies in the government.

And all of these fluids and contaminants were issued into the environment with no or circumspect prior treatment.

Sign of Hope e.V. -Hoffnungszeichen (Sign of Hope)wishes to draw the attention of the United Nations Human Rights Council to the violations of basic human rights by means of gross environmental pollution by the crude oil producing consortia in South Sudan.Sign of Hope calculated the total amount of contaminating fluids that were released into South Sudan’s environment between 1999 and 2020.

According to Sign of Hope’s findings these contaminants have been released into the environment with no or negligible prior treatment.

Such amounts of contaminants entering the environment severely affect the communities inhabiting the oil producing regions. A poisoned environment deprives them of their human rights to clean water, health, and life. The responsibility for the contamination and for its consequences is shared by the government and by the oil industry in South Sudan. Sign of Hope calculated and estimated the contamination amounts in light of the history of official belittlement and inaction pertaining to mass pollution and its harm to humans and the environment.

Sign of Hope calculated contamination amounts on the basis of official statistics and of the samples we have taken from contamination sources on site. As to our account there are three major sources of environmental contamination from oil production in South Sudan: (1) produced water, (2) drilling fluids, and (3) oil spills. Air pollution is not included in the figures at hand.

Drilling fluid amounts are calculated on the basis of the overall number of oil wells. The number of wells officially communicated by the three oil consortia sums up to at least 1,410. In the oil fields, close to each drilled well there is an open mud pit, into which drilling fluids –toxic chemicals used to facilitate the drilling process –are dumped. We calculated the volume of an average mud pit to be 5,600 m³. We estimated that each mud pit is completely filled only once. The overall amount of drilling fluids in all of the pits taken into account is thus 7,896,000,000 litres.

To estimate heavy metal amounts in drilling fluids we based our calculation on three drilling fluid samples taken at two different oil drilling sites in the SPOC concession area. Extrapolating from these samples we calculated the total amount of heavy metals: We estimate that 1.18 tons of chromium, 12.05 tons of lead, 2.53 tons of nickel, 1.39 tons of cadmium, and 437,806.88 tons of salt contained in the drilling fluids have been dumped into open mud pits across South Sudan in the last twenty years.

Sometimes these pits were lined with plastic sheets. Often they were not. As the Government of South Sudan and the oil industry could not provide a documentation process of drilling fluid disposal so far, we assume that these calculated immense amounts of toxins were disposed of into the environment untreated.

There is no official source on oil spill accidents in South Sudan. Sign of Hope does not claim to report all spill incidents here. Yet, analysing satellite imagery Sign of Hope detected and calculated the amounts of two major terrestrial oil spills in consequence of export pipeline ruptures in the concession area of GPOC.The first oil spill took place some 40 km north of Rubkona, at N 9°36’49.83’’; E 29°37’36.83’’ on or about August 24, 2019. We measured the surface oil cover to be 10,000 m2 at least. On the basis of information provided by our agents on the ground, we estimated the average oil layer thickness to be 20 cm. We calculated the amount of oil spilled at around 12,500 barrels, which equals around 2,000,000 litres.

Impacts on Environment and Human Health

Pollution from oil production significantly affects the quality of water,air, soil and consequently human health. Produced water seeps into the upper drinking water layer substantially elevating salt concentration in drinking water.1This endangers the sensitive eco-system of the Sudd wetlands, which is to be protected under the Ramsar Declaration. Ponds and pits containing produced water or drilling fluids constitute a hazard as their contents seep into the ground. Besides they are at risk to be flooded during rainy season. Entering the environment in vast amounts, produced water turns drinking water inconsumable for humans and live-stock.1Rueskamp, Hella; Ariki, John; Stieglitz, Klaus; Treskatis, Christoph (2014): Effect of oil exploration and production on the salinity of a marginally permeable aquifer system in the Thar Jath-, Mala-and Unity Oilfields, Southern Sudan. Zentralblatt für Geologie und Paläontologie 1: 95–115.A/HRC/46/NGO/944

The United Nations Human Rights Council should urge the Government of South Sudan to:

• Provide all oil field residents with clean water as well as infrastructure and medical treatment for contaminated humans and livestock;

• Instruct the oil producing companies to remove and dispose of production waste and spilled oil in such a manner that it does not endanger human health or environment, and to publicly document the waste disposal process;

• Ensure a comprehensive, transparent, unbiased and participatory environmental audit.The Government should conduct and publish all Environmental Impact, Social Impact and Strategic Environmental Assessments and protect the environment by law;

• Take broad measures to assess the damage and to bring about the remediation of environment and the compensation of those, whose lives and livelihoods have been affected by contamination caused by oil production – as stipulated in South Sudan’s Petroleum Act of 2012