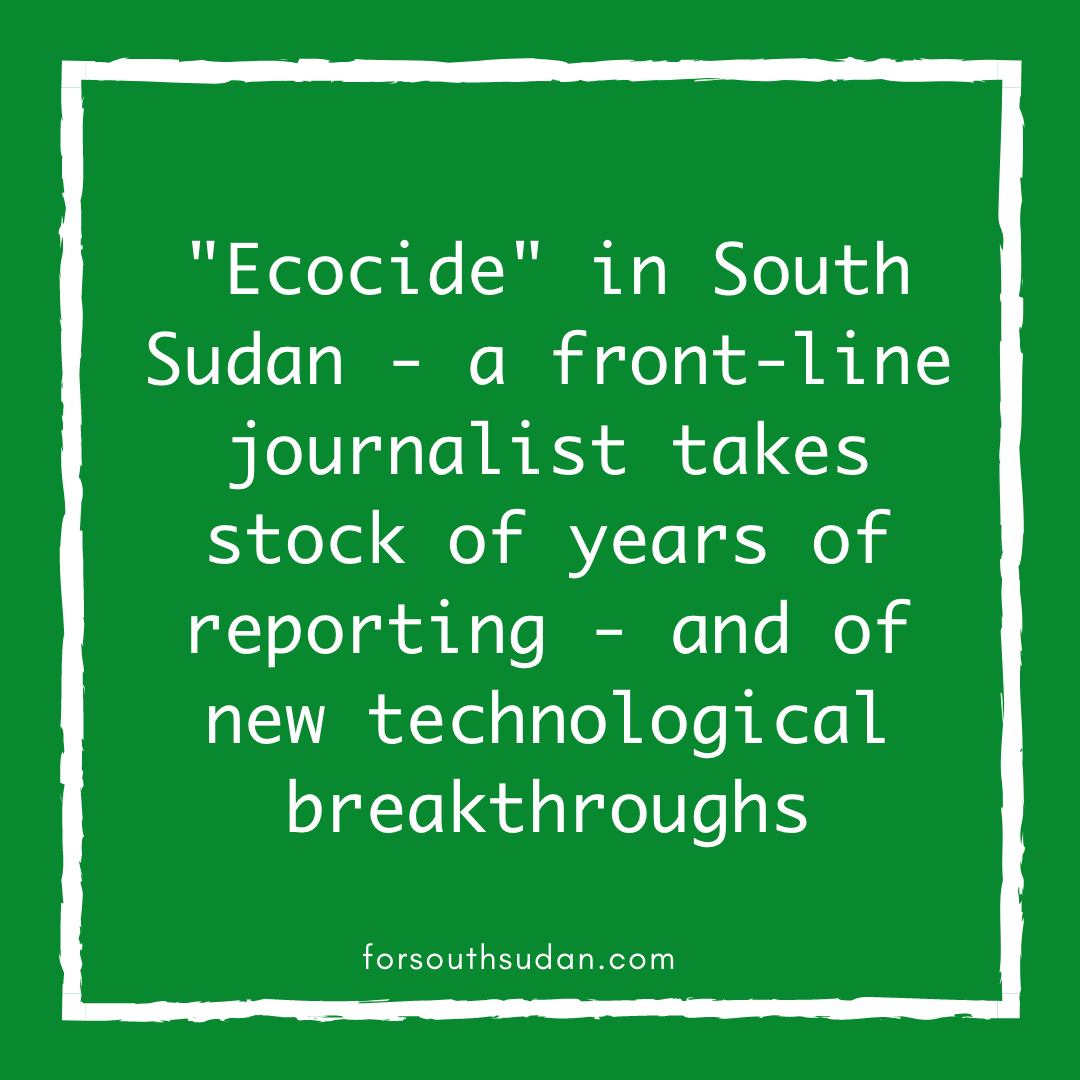 Editorial by Joseph Oduha
One of South Sudan’s most courageous and versatile front-line journalists, Joseph Oduha was forced to flee the country in summer 2019.

He subsequently managed to free himself from kidnappers presumably wanting to drag him back to South Sudan. He is now in safety in a country outside the region.

Satellites flying above South Sudan, smartphones on the ground: the world is finally getting an eye of what is going on in the country. And this in-depth look is revealing an environmental emergency of an unimaginable scope. We journalists have been joined by local residents and activists in reporting – for many years – on this “ecocide”. To the extent that the South Sudanese government let us.

But now we have powerful new allies.

‘South Sudan was baptized in oil.’ That is one very good way to describe the short and tragic history of this country ever since it became independent in 2011.

The struggle to control the oil, its positions and its revenues led to a civil war’s breaking out in South Sudan in 2013.

It continues to this very day – and is one big reason why more than half of South Sudan’s population of 12 million is going hungry – or doesn’t know where its next meal is coming from. And why 40% of the 12 million have been forced to flee their homes.

Another very big reason for the population’s hunger and flight is something that started with the pumping of the first barrel of oil: the petroleum consortia’s failure to observe international, national and corporate environmental and technical standards and regulations.

The commencement of oil production was accompanied by the launching of an unprecedented contamination of the environment – and specifically of groundwater. Rather than properly disposing of oil wastes properly – as demanded by the above standards and regulations (specifically the Petroleum Act of 2012), the consortia – whose owners include Petronas of Malaysia, China National Petroleum and ONGC Videsh of India – found it more profitable to let the wastes trickle into unprotected and unsecured pools and seep into soil.

Spurred by greed and the need not to upset these oil companies, the government of South Sudan decided to facilitate this failure – by deliberately failing to exercise its oversight and enforcement responsibilities.

War and corporate and governmental greed joined to let the oil consortia also slide on the upkeeping and upgrading oil facilities and pipelines.

One ‘growth industry’ in South Sudan has been repression. Of the truth. The government’s willingness to do virtually anything to stifle protests about and reports on oil-produced contamination and suffering have bequeathed South Sudan a number of highly undesirable distinctions.

It has been ranked by dedicated international organizations as being one of the very most dangerous countries in the world for journalists and development workers – and as being among the most corrupt and unfree.

Overcoming the government’s great hush-up, the truth about what is going in the country’s oil producing regions has been getting out.

Aided by such international organizations as Sign of Hope, these reports forced the government of South Sudan to acknowledge that the country has a major oil pollution problem, and to promise to take effective measures to alleviate it.

Notwithstanding this and, as well, the government’s recent commitment to conduct a countrywide assessment of the extent of oil pollution, no measures have actually been taken.

And they are desperately needed, as shown by the series of the oil-caused fires and of oil spills, leaks and seepages that have been dominated the news in and from South Sudan.

This “eco-cide” has led brave lawmakers, officials and activists – risking their positions and even lives – to launch series of urgent appeals.

The most recent appeal was made by Mary Ayen Majok, a lawmaker representing Ruweng state in South Sudan Council of States.

She demanded that the government suspend the operations of the El Toor field processing facility, which is located in Aliny county. El Toor reportedly experienced several major fires – produced by the failure to properly maintain infrastructure and to dispose of oil wastes.

“We need to make the wise and bold decision – that is better to suspend the operation until we put things in order,” Ms. Ayen recently stated.

This courageous reporting is getting a huge shot in the arm from two developments: satellites-generated streams of detailed images of what’s happening on the surface of South Sudan – and the smartphones wielded by the South Sudanese situated in the vicinity of the fires, spills, leakages and other disasters.

“The reporters that can’t be intimidated or bribed,” is how the satellites were recently described.

As a journalist who was neither intimidated nor bought, I find the onset of these new technologies to be one of the very few heartening developments to come out of South Sudan in a long time.

One of the world’s great environmental time bombs