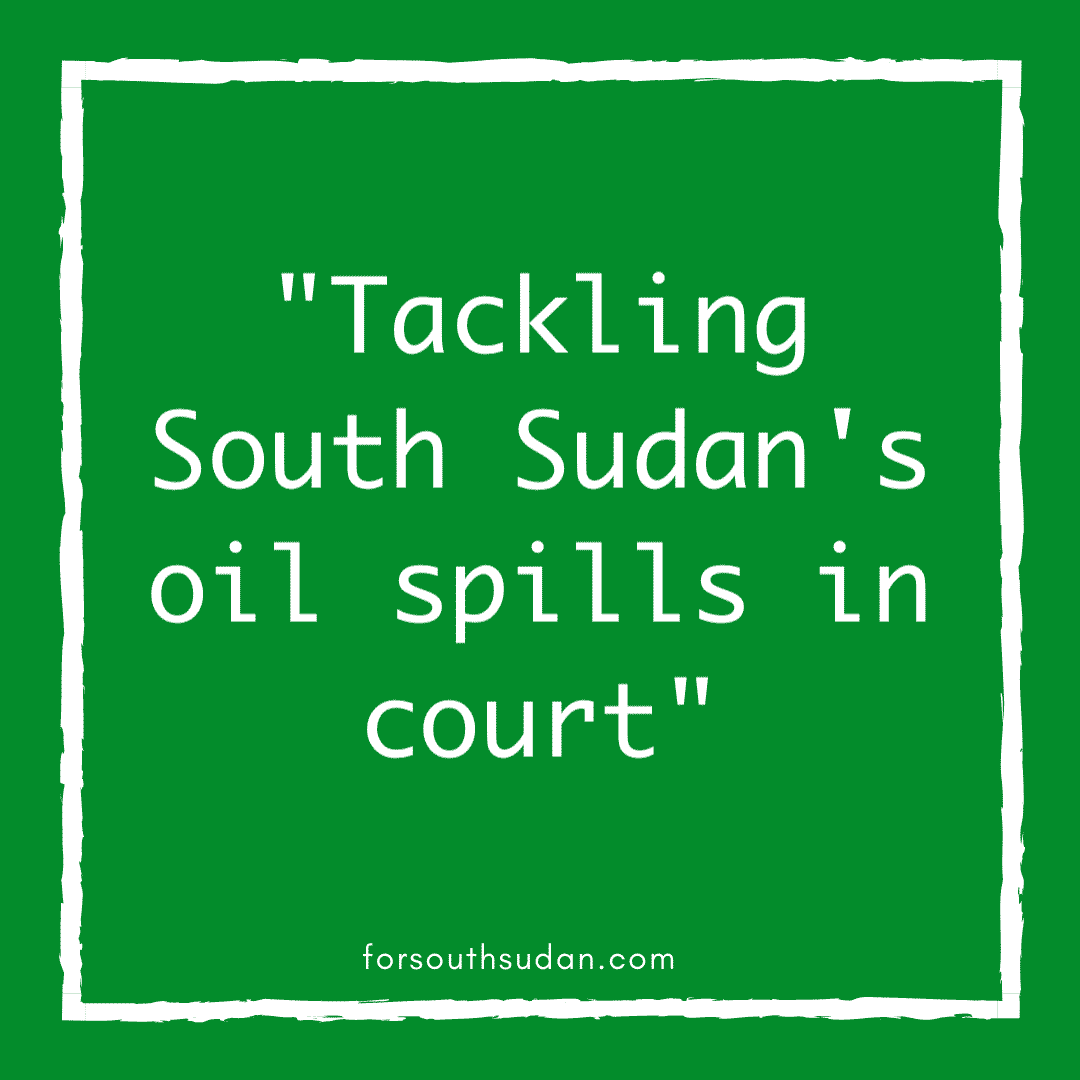 Tackling South Sudan’s oil spills in court The price crash has put producers around the world under pressure – but few are facing a court challenge in a bid to stop the oil flowing.
by Ed Reed 10/07/2020, 7:30 am

The price crash has put producers around the world under pressure – but few are facing a court challenge in a bid to stop the oil flowing.

South Sudan is the outlier. A legal challenge mounted in late April by Hope for Humanity Africa in the East African Court of Justice, in Tanzania, aims to do just that.

A temporary injunction was filed at the beginning of June. This called for the government of South Sudan and the two major producing consortia, Greater Pioneer Operating Co. (GPOC) and Dar Petroleum, to halt oil flows.

Describing the impact of the oil spills as an “environmental genocide”, Jada noted the knock-on impact on communities around oil sites.

“Communities depend on local waters from the streams and swamps for drinking, for cooking and for bathing. But these are dangerous,” the lawyer said. The rivers and streams feed into the Nile and then into the Mediterranean Sea, making these spills a “universal disaster”.

The problems stem from the “government and the companies involved”, he said.

“We need the respondent [the government of South Sudan] to be directed to instruct GPOC and Dar to clean up the environment. Much of the soil is polluted. This must be remedied so that it can be useful for human use again. The export pipeline must also be replaced as there are a lot of spills and it is in bad shape,” Jada said.

The lawyer filed the case with the Arusha court on April 27. In addition to a temporary restraining order, it also asked for specific damages of $720 million. “General damages and exemplary damages can be granted by the court. It might end up in the billions,” he said.

Dar refused to accept the summons, the lawyer said, but the most important thing is that the government has been formally notified. Article 41 of the South Sudanese constitution enshrines the right of people to have a “clean and healthy environment”, for the present and for future generations.

Pictures and videos from the country have demonstrated problems with these aspirations. Reports of birth defects and miscarriages are common.

Representatives from Juba declined to comment in response to Jada’s allegations.

Concerns about South Sudan and the oil industry’s environmental legacy are not new.

The European Coalition on Oil in Sudan (ECOS) published a report in 2010 on human rights violations in South Sudan. Egbert Wesselink participated in the “Unpaid Debt” report and remains critical of the country’s operations.

“It’s one of the worse managed and worst monitored oil operations in the world. Neither Khartoum nor Juba had any interest in making these companies behave better – and they don’t have the knowledge to do that,” he said.

An impact assessment was carried out in 2018 on Dar’s work in Unity State. This made a number of recommendations on tackling the most immediate problems. These included waste pools of oil, where liners had cracked, and abandoned containers holding chemicals that had broken open.

“The immediate clean up would have cost $60 million but there was no will from the government to spend the money,” Wesselink said. “Decision makers in Juba have bigger concerns than the environment. Energy and money is focused on securing political influence.”

Progress is coming, although slowly, on the Unpaid Debt report. This alleged Lundin Petroleum may have been complicit in allowing war crimes to be carried out. The company denies the allegations.

Wesselink said the Swedish prosecutor had sent a final notice, while Lundin is asking for some additional investigation. “It’s likely to go to court early in 2021. This will serve as a warning for CNPC and Petronas,” he said.