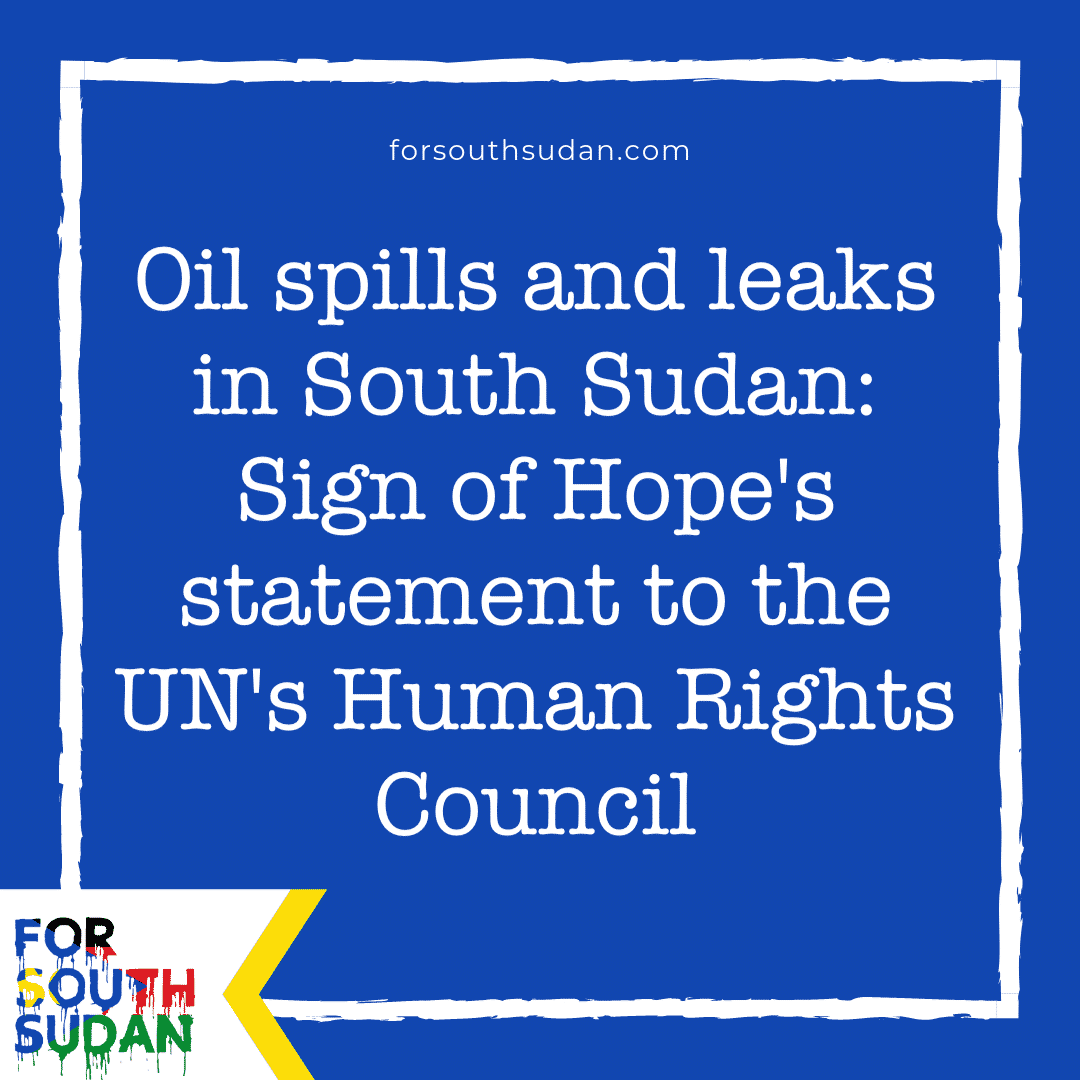 Sign of Hope wishes to draw the attention of the United Nations Human Rights Council to the violations of basic human rights being perpetrated in South Sudan. These breaches are ensuing from oil spills –and from the inadequate efforts to clean them up. Sign of Hope’s investigations have resulted in the detection and documentation of the series of ruptures experienced by South Sudan’s main and gravely dilapidated pipeline of oil export. The two most recent ruptures gave rise to massive oil spills. Some 6,000,000 litres of crude oil were leaked into the environment, contaminating 30,000 m2of soil in the process.

Such spills severely affect the communities in their vicinities. These spills and other oil-related sources of pollution contaminate the water drunk by the residents and their animals and used to irrigate their fields. The final result is a devastation of health and loss of livelihood.

The responsibility for the contamination and for its consequences is shared by the government of South Sudan and by the oil industry.

Pipeline repair work was observed in February 2020.1As the sequential ruptures detail, the pipeline is dilapidated. Its deterioration probably took place during the five years of civil war, during which time oil production and transportation were halted. As the ruptures indicate, the pipeline is apparently no longer capable of withstanding the pressures required to be maintained to transport oil through it. Further ruptures are thus likely to be expected at any time -on any of the possible weak points in the pipeline. It for this reason that Sign of Hope considers thepipeline to be an ongoing threat to the people and environment of South Sudan.

The pipeline in question was put into operation in 1999. It is one of the two connecting South Sudan’s oil fields –via Khartoum –with Port Sudan, Sudan, which is sole point of exporting for South Sudan’s oil, which accounts for some 98% of the revenues of the government of South Sudan.

The segment of the pipeline in which the above ruptures occurred links South Sudan’s Unity oilfields with the Heglig pumping station. As of October 2019, the pipeline –whose diameter is 20 inches –was transporting 54,000 barrels of crude oil a day. The consortium operating the pipeline –which is thus responsible for any environmental damage –is the Greater Pioneer Operating Company Ltd. (GPOC).

Requisite to ensure long-term functioning of a pipeline is the sustained flow of crude oil through it. It is to be assumed that the pipeline suffered structural damage during the periods during which it was shut down. Obviously the Government of South Sudan remains unwilling 1Agence France Presse: NGO urges shutdown of ‘dilapidated’ South Sudan oil pipeline. February 25, 2020;https://www.news24.com/news24/africa/news/ngo-urges-shutdown-of-dilapidated-south-sudan-oil-pipeline-20200225

Infant deformities due to oil pollution in South Sudan