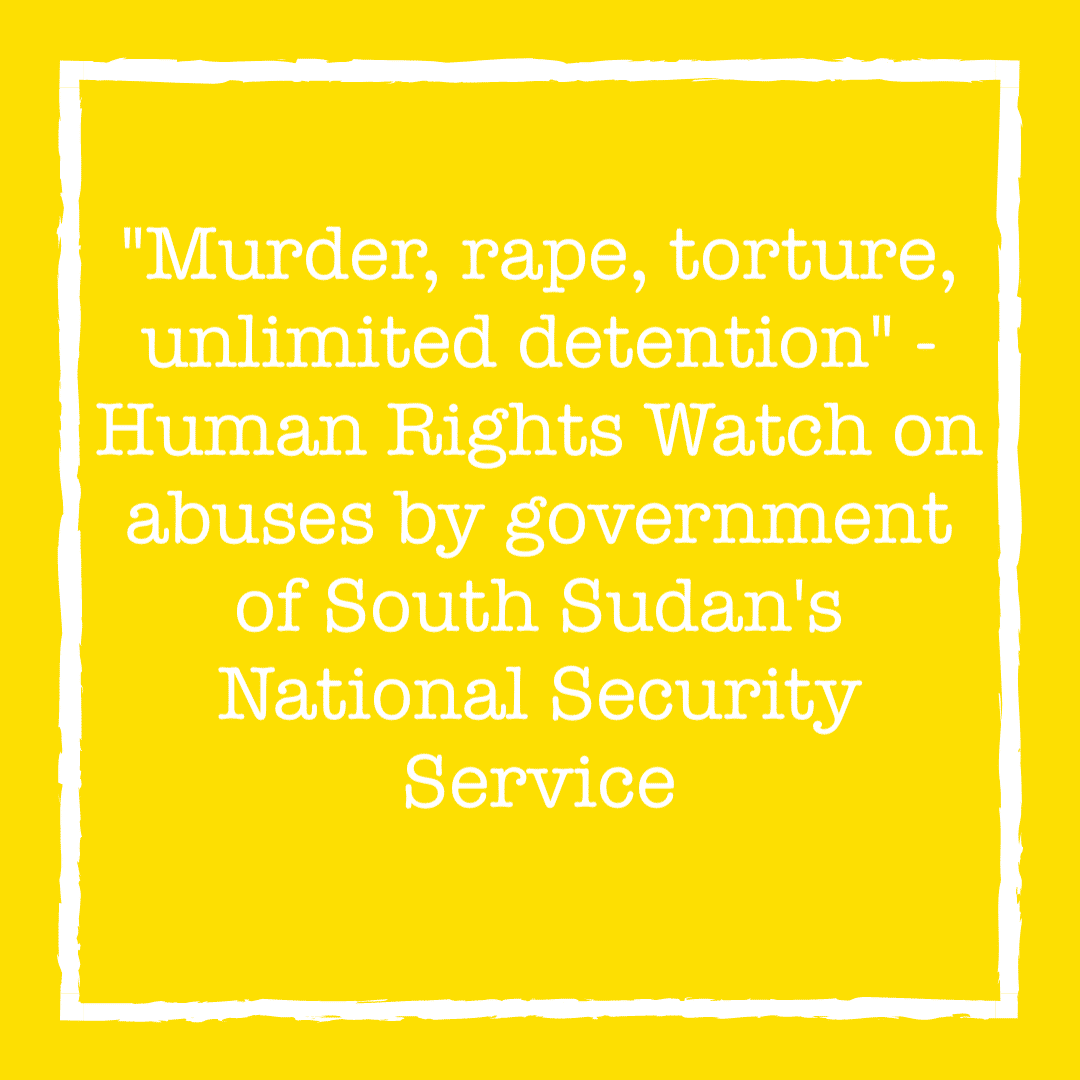 (Nairobi) – South Sudanese authorities have failed to stem or investigate the appalling abuses by the country’s National Security Service (NSS), Human Rights Watch said in a report published today. Since the outbreak of the civil war in December 2013, the security service has carried out arbitrary and abusive detentions, extrajudicial killings, enforced disappearances, and illegal surveillance, with little to no accountability or justice for victims.

The 78- page report, “‘What Crime Was I Paying for?’Abuses by South Sudan’s National Security Service” looks in depth at the patterns of abuse by the National Security Service between 2014 and 2020, and at the atmosphere of fear it creates. Human Rights Watch research identified the obstacles to justice for these abuses, including denying due process for detainees, the lack of any meaningful judicial or legislative oversight of the agency, legal immunity for NSS agents, and ultimately a lack of political will to address these widespread practices. These abuses have left victims with long-term physical and mental health conditions. December 14, 2020

How an Invitation to Tea Led to Months of Torture

“All that is needed is political will to rein in South Sudan’s notorious security service and ensure redress for years of abuses,” said Carine Kaneza Nantulya, Africa advocacy director at Human Rights Watch. “Instead, the agency remains the government’s preferred tool of repression, promoting a culture of impunity and leaving victims and their families with little recourse for justice.”

Since the outbreak of the conflict, the security service has regularly targeted journalists, activists, opposition figures, and critics for detention and other abuses. Its role also expanded from intelligence gathering to include law enforcement functions and combat operations.

Detainees have been held in three NSS detention sites in Juba – Blue House, Riverside, and Hai Jalaba – or in secret places, including homes, for hours and as long as four years. None of these places are legally authorized as detention sites. The opacity surrounding the detentions makes it very hard to know how many people are currently under NSS custody but as of late October, the NSS held at least 200 people at the Blue House, an intelligence official told Human Rights Watch.

NSS officials have tortured and otherwise ill-treated detainees, including beatings, piercing them with needles, dripping melted hot plastic on them, hanging them upside down from a rope, electrical shocks, and rape. The agency detainees have included pregnant women, people with disabilities, and children.

Detainees are denied access to lawyers and family. Most are never charged or brought before a court. Those interviewed said they were freed as arbitrarily as they were detained, including through presidential amnesties, via connections, or by paying bribes.

These prolonged detentions and the harsh conditions including beatings, solitary confinement, and inadequate food and water have both a physical and mental toll on detainees. “I can still feel the needles on my skin,” said a 27-year-old former detainee who was tortured at the Riverside detention site with needles driven into his testicles. He was interviewed six months after his release.

The agency also conducted unlawful physical and telephone surveillance of some people interviewed before and after their release, prompting several to flee the country. It has also harassed and abducted South Sudanese in neighboring countries like Kenya and Uganda.

These practices have thrived due to lack of adequate legislative controls and poor judicial and civilian oversight over the agency, Human Rights Watch said. The NSS Act grants the agency broad powers of arrest, detention, search, seizure, and surveillance. It does not include guarantees to prevent arbitrary detention and torture or other ill-treatment and provides for immunity for the agents. While it requires the NSS to bring detainees before a magistrate or judge within 24 hours of their detention, the NSS seldom, if ever, does, Human Rights Watch found.

In September 2019, President Salva Kiir issued an order creating a tribunal to try NSS officers for crimes against the state. But, there is no evidence that the tribunal or other accountability efforts have resulted in credible investigations and trials for serious rights abuses.

As part of the country’s 2018 Revitalized peace deal, to end its civil war, the government agreed to reform the agency. However, proposed amendments presented to the Justice Ministry in June 2019 are minimal and fail to get to the heart of the abuses. While they would criminalize torture, they limit, but do not eliminate, the agency’s powers of arrest and detention. The NSS would retain surveillance powers, without sufficient oversight, and retain overly broad authority to arrest people suspected of “crimes against the state.” These amendments are pending, awaiting the creation of a new parliament.

The Revitalized Transitional National Legislature of South Sudan created under the peace agreement – once established – should urgently revise the law to impose genuine limits on the NSS role and powers. The government should order the closure of all unauthorized detention sites, release detainees, and introduce appropriate legal safeguards to prevent abuse of the agency’s surveillance powers.

Former detainees said they needed justice, compensation and livelihood, and mental health support, but feared reprisals: “They tortured and detained me for more than one year,” one former detainee said. “Released me without charges and threatened me to not share what they did to me with anyone…Can you think what they will do to me if I open a case against them?”

South Sudanese authorities should conduct credible and thorough investigations into NSS violations, including the role of the national security minister and the agency’s top leadership in perpetuating abuses by the service, Human Rights Watch said. South Sudan’s regional and international partners should press the government to end the abuse, reform the NSS, and ensure justice for NSS abuses.

“South Sudanese authorities need to reform the security service and ensure justice and compensation for victims,” Kaneza said, “This is a crucial step toward building a vibrant country whose future is rooted in the rule of law and respect for fundamental rights.”

Selection of articles and videos